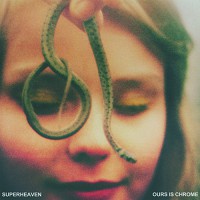 If ever there was a band stained with the signature of '90s grunge, it's Superheaven. After their name change from Daylight, I figured working with Will Yip (who also produced 2013's badass effort in Jar) would bring about a change in sound. That seems to be Yip's thing these days. These guys however manage to stick to their stylistic guns on Ours Is Chrome. The only problem is that over 70% of the album sounds the same and really strains to stand out in any way whatsoever. In one word, it feels formulaic.

Note, it isn't a substandard record. I don't think Yip has it in his blood to churn out shit. But Taylor Madison's vocals don't speak to me as much as it did back then. Jar had a sense of camraderie with bands like Captain, We're Sinking as well as Basement and Citizen. I sound like I'm fanboy-ing Run For Cover Records but honestly, they all matched up so well. Superheaven, however, seems to go off the rails with a monochromatic fling at regurgitating the same musical structure, time after time after time. The breakdowns and lulls are so rigid and predictable. "I've Been Bored" and "Next To Nothing" really don't deliver as openers despite the dense, lush guitars at hand. And yes, it's quite a guitar-driven album but somehow, it doesn't hit home, even amid Madison's always-intense and personal lyrics.

The walls of sound and overall guitar textures feel like what Yip did with Title Fight just when they started losing grip with their fanbase and it leaves me wondering about Superheaven's approach here. I know the concept of the album is that the fancy band shtick isn't all that it's cracked up to be, yielding very depressive and dark tones, but it's when they get anthemic and slightly catchy on tracks like "Leach" and "Dig Into Me" that they really register. Somehow, the overly-cynical aspect of this band just seems overdone and worn out and it's on these songs that Superheaven really resonate. They nod to "In On It" in 2013 and most of all, remind you when the band felt more balanced.

Ours Is Chrome feels skewed, boring and one-dimensional. Lulls, heavy guitars and a solo here and there. "From The Chest Down" is another track that tries to reel you back in but by then it's too little, too late. Angry riffs and gigantic hooks build the base of the album and it's one heavily steeped in frustration and angst. Sadly though, as emotional and honest as the record gets, too many songs are forgettable and lack the punch possessed a couple years ago.

Hop Along: live in Allston