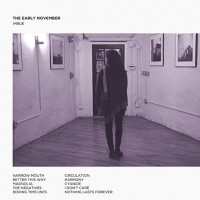 I remember when Warped Tour CDs were something I couldn't wait to get my hands on. The Early November was one of those bands that contributed to this. "Something That Produces Results" was one of those jams I kept wasting time to on the bleachers in high school. As the band grew, they lost steam. They felt lazy and disconnected from their loyalists. You could tell something was taking a toll on their music and their split felt inevitable. Personally, I lost zeal for them although 2012's In Currents did just enough to reignite my interest following a reunion the year before. Sticking with Rise Records seemed the safe bet after the 2012 album and as Imbue plays out, it turns out to be a good choice. The album's chock full of radio-ready tracks and fits the Rise mold in terms of sellability and attracting a new crowd to a band that left the old behind.

You get their old presence in bits and pieces and you know what? That's alright. Evolution, right? "Narrow Mouth" follows in the vein of their 2012 offering as it unveils itself as a '90s hard rock jam -- alternative and grungy which nods to bands like Balance and Composure and the old Title Fight, just not as gritty. TEN traded their old brash style for a more uniform modern-emo rock stance and again, while unsettling at times, this seems to be the skin they're most comfortable in. They've never sounded so reassured and free-flowing. Not to mention, versatile.

For the oldies, "Magnolia" is a pop-punk throwback to give you that nostalgic shot in the arm while "The Negatives" kicks major ass through its mixed vocals and dynamic guitars. Ace Enders maximizes his vocals on these tracks and stretches his range with a confidence you never really got acquainted with back in the day. When they started to go off the boil I think it was largely due to him not feeling confident on the mic as opposed to the mediocre writing they were putting down. He really is a driving force for them. The latter track feels like a Warped Tour 2K4 gem and it's this kind of song that really shows Enders' value.

The impressive interplay on the guitars and overall mix of melodies come alive so much on tracks like "Boxing Timelines" as well as the radio-friendly electric ballads in "Circulation" and "Harmony". This does seem to be the undoing of the record in a sense though as the second half spirals into a bit of alternative-crust tunes that feel much more like products than art. Still, they're nicely assembled and you really can't argue with TEN's musical structures on most of the tracks. All in all, it's an accessible ride and if this is your first rodeo with them, then Imbue isn't such a bad jumping-on point. However, it doesn't hold up to the young days where The Early November were immature mavericks letting loose. Still, it's always nice to see a high-school fave of mine still alive, and oh so kickin'!!!

Fire In The Radio: Telemetry