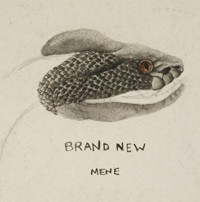 Brand New have finally returned with â€œMene,â€ their first new material in six years (twice the groupâ€™s usual album cycle.) Each of Brand Newâ€™s four albums has is its own sound, its own character, but for the first time ever, the Long Island band have written a track that feels like a greatest hits compilation of everything theyâ€™ve done before, and while that style songwriting can easily go south, the results are surprisingly awesome.

â€œMeneâ€ has the fast tempos of Your Favorite Weapon (in fact it might be their speediest track to date), the spoken word vocals from Deja Entenduâ€˜s â€œSic Transit Gloria... Glory Fades,â€ the dramatic scope of The Devil and God are Raging Inside Me, and the harsh feedback and throat-shredding screams of Daisy, all within less than two and a half minutes.

The track opens with an almost thrash metal-tempo drum roll from Brian Lane and soon settles into a moody but catchy post-punk groove. Jesse Lacey uses his full vocal range here. The screams from Daisy tracks like â€œVices" are present, as is his melodic singing voice, and some dramatic spoken word. Vincent Accardiâ€™s backing vocals are also excellent, as always.

Brand Newâ€™s lyrics have always been able to convey both complex, personal issues, as well as slogans that sound good in singalongs at live shows. â€œMeneâ€ has both. Sample lyric: â€œThe ocean never sleeps or dreams, It never stops to ponder what it sees. Committed to its satellite, no one can move you man and no oneâ€™s ever going to try.â€ The entirety of the chorus? â€œWe donâ€™t feel anything!â€

Itâ€™s great to have this band back making music. While we obviously donâ€™t have a full-length to make an accurate judgement on yet, â€œMeneâ€ doesnâ€™t appear to represent as big of a stylistic leap as the group are accustomed to taking between album cycles, but itâ€™s a fantastic song that will only leaves Brand New fans wanting more.

Take One Car: Everyone You Know is Here Right Now