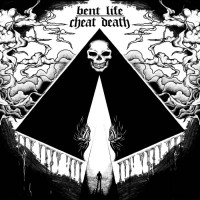 Over the past couple of years, Bridge Nine has branched out quite a bit with their releases. The most popular/blatant example is probably releasing Lemuria's sprightly, melancholy laced album The Distance is So Big. Other recent outliers include Long Island punks Iron Chic and the sugary pop punk of Candy Hearts. If a Bridge Nine devotee from 2008 saw this roster, they'd most likely scratch their head and wonder if the label had completely changed their way. Once they stumble upon recent Bridge Nine signees Bent Life, however, they'll breath a sigh of relief because they've found another slice of hardcore comfort food.

Hailing from Nebraska, Bent Life play a brand of hardcore that fans of Trapped Under Ice, Rotting Out, and, well, countless other bands will appreciate. On their new 7-inch, Cheat Death, which was recorded before the band's B9 signing, chants, shouts, breakdowns, and a spoken "fuck you" thrown in for good measure, are all there. You can imagine how these songs sound. With gruff vocals and choppy guitars, the band pretty much hits every mark you expect them to. A side "Nail in the Coffin" morphs and changes several times during its running time, but it is not enough to shake off the feeling of familiarity. B side "Cheat Death," with it's buzzsaw guitars and forward momentum feels familiar as well, but it fares much better. The band is able to sustain a feeling of forward mobility during most of it's four minutes, preventing the listener from spacing out. The song's lyrics about "fighting a war I can't win" could have been cut and pasted from pretty much any hardcore record from the past 30 years, but the use of vocal manipulation in the song is surprisingly effective.

With a full length record on the way, one hopes Bent Life can shake things up a bit more and stray from the standard hardcore formula. If not, well, there's nothing wrong with comfort food.