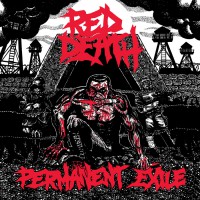 Ah, feedback. When the high pitched squeal is the first thing you hear on an album, is it ever not followed by a heavy as a cinder block guitar riff? Is anyone ever disappointed when it is? If you are, then you should probably get away from this Red Death album. Everyone else: pull up a seat.

Red Death manage to both flex their muscles and stretch their limbs on Permanent Exile, alternately crushing you with riffs and throwing you curveballs, like noise/ambient experiment "Atomic Howl" that seamlessly transitions between two tracks. Red Death play crossover thrash in a vein that makes them seem like the missing link between Warzone and Municipal Waste. They're all razor sharp guitars and galloping rhythm as opposed to the thick, chugging riffs found on D.R.I. and Cerebral Fix albums. Red Death make good use of stop start dynamics and feedback to bridge the gap between sections as their songs twist and convulse at their own maniac pace. Red Death songs change up so much, it's difficult to tell what you're being smashed in the face with. In the end it's irrelevant, because all that matters is that the blows are making a deep impact.

Most of the songs on this album are between one and two minutes (standard territory for crossover trash). The band branches out a bit with their song "Alleviate," which is just under four minutes. Starting with a shrill guitar bellow many noise rock bands would love to call their own, the song slowly launches into a classic Thrash crunch and stomp before pulling back again. The song proves Red Death can create a longer song without seeming bloated or losing intensity. In this genre, that is no small feat. If "Alleviate" is any indication, Red Death are capable of making an even more ambitious and pummeling creation than they offer here. Permanent Exile should have no problem keeping me company until that happens, though.

This year saw the release of The Red Line Comp, a collection of songs from Washington D.C. area bands with a shared interest in Thrash. Hopefully the rest of these bands can offer up a fully formed set of songs like Red Death have here with their fantastic debut.

We Are The Union: Keep It Down