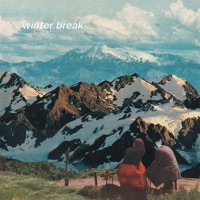 In June 2014, Southern California punks Summer Vacation called it a day. However Aaron, Matt and Mark carried on as Winter Break almost immediately. With the new name came a new sound, combing tempo changes and shifts in dynamics with a more melodic and confident vocal style. Despite shrinking in size, the band grew overall. Less than a year after Summer Vacation called it a day, Winter Break have released their self-titled debut album.

The first thing I noticed about this album was that it seemed out of place with the era it was released in. In an era where many bands are reaching back and incorporating a second wave emo feel into their sound, Winter Breakâ€™s debut sounds like a forgotten classic from that era. This is most obvious in the chord shaping throughout the album. This combined with the varied vocal delivery made me feel like I was listening to a darker more aggressive version of The Get Up Kids Four Minute Mile in the best sense of that comparison.

One of the standout tracks on this release, â€œCut the Braidâ€ has a guitar hook that gets stuck in your almost immediately. Lyrically, the song appears to be about cutting ties with your past. The lyrics on the bridge, â€œsinging an old song today, because thereâ€™s nothing left to say. I sing a new song, because I still have things to say,â€ sticks in your head as well. While Iâ€™ve listened to this album at least ten times in the past week, the combination of the guitar hooks, lyrics, and vocal delivery have made this a song I find myself revisiting more frequently than the album as a whole.

While the second wave emo sound holds up throughout the album â€œFolk Songâ€ is a bit of a departure, if only musically. Sounding like it would be at home on a Defiance, Ohio album once they started incorporating fully electrified instruments into their sound. The world weariness of this track, especially in the first verse when the band laments, â€œAm I alone with all these friends, do they like me for me?â€ You get the sense the bandâ€™s new name makes perfect sense, while the concept of winter break strikes me a bit differently as I live in southwestern Ohio than it does anyone living in southern California, suffice to say, summer vacation and winter break arenâ€™t the same. While summer vacation brings to mind hanging out with friends and having a good time, winter break brings to mind icy cold days and weather that would frequently find me alone in my apartment with my thoughts. Which is the difference I hear between Summer Vacation and Winter Break as bands, topically speaking, while one is the soundtrack to sunny summer nights the other can leave you feeling unsettled. But, even at its worst, winter brings the hope of spring and even at their bleakest, you never feel these guys have lost hope.

Thereâ€™s something special about this album that I canâ€™t put my finger on. Rarely do bands put out debuts that are this fully realized. Perhaps, thatâ€™s where Winter Break sets themselves apart though. This isnâ€™t so much a band trying to find their sound, as it is a group of guys whoâ€™ve been playing together for some time refining an old one. This new sound is catchy without losing its edge and world weary without being hopeless. While the band calls southern California home, you get the distinct feeling they wouldnâ€™t be out of place sharing a stage or a home with any of the bands currently residing in the Midwest.