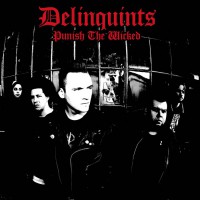 Toronto, Ontarioâ€™s Delinquints have been rockinâ€™ the Canadian punk scene since 2002. For you Kenny vs. Spenny fans, you may have seen the band perform an hilarious hardcore song with Kenny Hotz in the episode â€œFirst Guy To Stop Singing Losesâ€ (skip to 14:48).

After a two-year hiatus, the Delinquints reformed in 2014 and on April 27, 2015 they released a digitally re-mastered version of their Punished the Wicked release, which was originally out on May 28, 2010.

Of the seven tracks on this EP the most standout one is the song â€œHolidays.â€ This song starts out with a heavy drum and bass guitar intro that is accompanied by a very complex guitar riff that is filled with some awesome tapping, which is something you donâ€™t get too often with melodic punk bands. Jimmy Delinquintâ€™s, their lead vocalist, voice has a very confrontational overtone especially in this song. His singing sounds like a gruffer, raspier, and more coherent version of Tim Armstrongâ€™s voice. During the verses fuzz-heavy guitars mesh with Jimmyâ€™s voice really well. Through out the choruses, â€œHolidaysâ€ takes a big anthemic turn when the other vocalists join in.

With lyrics like â€œAnd you better pray that you do not fall behind/ If you canâ€™t pay for your freedom/You got a criminal mindâ€ in the song â€œCriminalize the Poorâ€ we see the more soci-economic/politically conscious side of the Delinquintsâ€™ material. Musically, this track is a bit more straightforward compared to the other six songs on this EP. This song specifically is much more about the lyrical message than just rocking out. This track starts out with one of the guitars letting the chords ring out as Jimmy Delinquent sings and then the transitions into a much faster paced, distorted power chord-dominated tune.

Canada has always produced great punk rock bands like Pup, D.O.A, Propagandhi, Fucked Up and the Delinquints as well. They have definitely put in a lot of work into their music and it shows on the Punished the Wicked EP. After giving this release just one listen, you will see that the Delinquents are a band that should not be overlooked in the least bit.