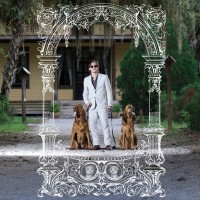 It's always interesting to hear Evan Weiss feature in something that isn't overly mathy or emo. That said, you bet he'd still ensure that his music maintains a DIY credence with the emotive pull of almost everything he's associated with. Pet Symmetry is a nice insight into the power-pop mindset of Weiss as he strays from Into It. Over It. and Their/Theyâ€™re /There while using Dowsingâ€™s Erik Czaja, and Mountains For Cloudsâ€™ Marcus Nuccio, for the extra oopmh. I was skeptical after hearing the first teases of Pets Hounds but it turns out to be a bunch of guys having fun in a let-loose record that allows them to kick the shit. It's one of those cases where a record doesn't take itself too seriously and manages to end up in the win column.

There are a lot of sounds clashing here and it's tough to pin down an exact sound for the band. From the lighthearted opener in "My Exhausted Month (Of May)" to the mid-section of the record on songs like "Go Outside (Stare At The Sun)", there's a huge pop-punk sensibility about Pets Hounds. Cheekily written and very head-bobbing. They mix the simple and cheesy frolics alongside the faster-paced and a touch more aggressive jams like "Aisle (Or Window)" and in doing so, you can sense how free and careless they are. It adds a lot of value as you pick up on how much these guys just want to disconnect from their parent bands and rock out.

The album's chock full of thick basslines and a flurry of crunchy, catchy hooks which take precedent over Weiss' vocals, which I think is a smart move as I've honestly heard a lot from him and didn't want this to be some regurgitation or iteration of something he's done before. The distorted drive of "Give Thanks (Get Lost)" is a wake-up call on the record and fits perfectly with another indie/alternative/punk pit-starter in "Class Action Force (Useless Tools)". You sense that each band member draws influence from their usual selves but don't overdo it as Pets Hounds carves out its own identity. Some tracks do feel like filler but it's something that can be overlooked with the rest of the quality standing out.

Pet Symmetry do well not to drown you as they mix and match styles. As "Salad Daze (Seein' Cred)" winds things to the end, the cerebral and slower rock vibe allows you time to breathe, perfectly gearing the session down. It builds Pet Symmetry's sound as more distinct despite any vague familiarity you may sense. Overall, Pets Hounds is a project that is well differentiated as a sum from all of its parts and one I look forward to hearing more from in the near future.