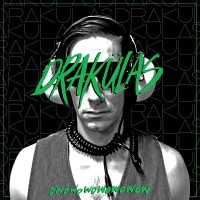 Drakulas are the new project featuring members of Riverboat Gamblers and Rise Against, and in the course of four songs, OWOWOWOWOWOWOW displays a solid mix of punk rock styles which cohere to become Drakulasâ€™ own. Boasting such pedigree as Drakulas does, expectations are high. The good news is they deliver on this promise in solid fashion.

The four songs represented on OWOWOWOWOWOWOW are energetic, forward-charging pop punk bangers akin to those of the Briefs and the Marked Men. Fans of Weibeâ€™s other band, High Tension Wires, will also undoubtedly find themselves right at home with Drakulas. The guitars buzz and thrash as the drummer wears his wrist out beating the hi-hat Tommy Ramone-style. As anyone who has seen Riverboat Gamblers live can tell you, singer Mike Weibe is a hell of a frontman, and his presence in Drakulas is as assured and commanding as ever. The zeal and unabashed energy captured on these four tracks leaves the listener with the strong impression that this band will rule live.

â€œOWOWOWOWOWOWOWâ€ begins the proceedings, sounding like a perverted version of the Dickies after imbibing too much coffee. The lyrics are twisted, and start the EP off on a satisfyingly weird foot. â€œGain Groundâ€ is a more Ramones-y jam, while EP highlight â€œCrimson Carpetsâ€ features rollicking, powerful drums accompanied by ferocious guitars and a memorable chorus. Final song â€œSpinal Chordâ€ is more of the same goodness, capped by a somewhat Misfits-like send-off.

In all, OWOWOWOWOWOWOW is a great introduction to a band helmed by familiar faces, and speaks to a solid future for Drakulas. Hopefully there is more to be heard from them sooner rather than later.

Royal Psalms: I Could Have Been Anything [EP]