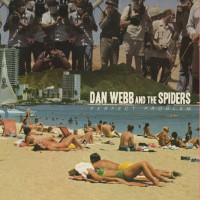 Dan Webb and the Spiders

Everyone has a go-to coffee shop, cafÃ©, or bar; a place where the tunes are good and so is the atmosphere. That place for me is Fuel CafÃ©, a part bike-themed and part hipster-punk hot spot in Milwaukee. When I picture waiting in line during the Saturday lunch rush at Fuel, Dan Webb and the Spiders is exactly the sort of music I imagine playing over the speakers. Something youâ€™ve never heard before, but somehow still pleasantly familiar. Something not too hostile or abrasive for the older crowd, but something lo-fi or unique enough to appeal to judicious young punks. Thatâ€™s Dan Webb and the Spiders: pop-punk, but with enough garage-rock grunge to keep things from getting too poppy.

Dan Webb and the Spiders are Boston-based garage-punkers signed to German label Gunner Records. The band put out a singles collection and an acoustic album in 2014 before beginning a long recording process on their fourth album that spanned nearly a year of time and three different studios. The result, Perfect Problem, is a cohesive 12-track collection that captures the straight-forward, rocking approach of Webbâ€™s songwriting, and has that perfect mix of grungy, fuzzy guitars with a slightly polished production.

â€œHappy songs about sad thingsâ€ is the description of the album on the press release, and thatâ€™s about as specific as an accurate description can get. At times, the band goes for an eccentric take on pop-rock akin to Sundials, but they head a little more towards grungy rock-n-roll on other songs. There are elements of earlier Weezer in some fuzzy beach-punk found on a couple tracks, too. Dan Webb has a great voice for the style -- not too off key, but a little gritty and unrefined. He aptly matches the level of each song with his voice. On rockers â€œNot Stoked on Trentâ€ and â€œBroken Things,â€ he gives a sort of weary rock-n-roll affectation, while on more pop-punk numbers like the titular track, heâ€™s gives the rough melody of an early Dan Andriano. He keeps his lyrics pretty generic (â€œYou say you canâ€™t wait to see me/ You say you canâ€™t wait to be me near me/ But I know you/ and I know that youâ€™re not trueâ€ is a pretty standard example), but at times he elevates it for a little more specificity, and the songs are better for it. The standout of the album, â€œA Loan," gets specific and personal, and it makes the song immediately more engaging than the others.

Perfect Problem is the perfect punk coffee-shop album. Itâ€™s not one that will be making huge waves in any scene, but it doesnâ€™t have a dull track and is consistently catchy and rocking from start to finish.

Royal Psalms: I Could Have Been Anything [EP]