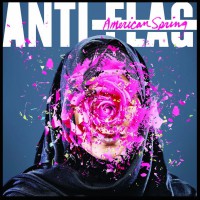 Anti-Flag are back in a big way. Itâ€™s been a few records now since these four gentlemen have sounded so inspired. What that says about our country is one thing, but what that means for us as listeners is one giant sounding album.

As always, there are two ways to listen to Anti-Flag, as a punk fan and as a political observer. These are not and should not be mutually exclusive. Although none of the last Anti-Flag albums were bad per se, they suffered from a band settling into a grove. Musically, they were strong as always, but creatively they were running in circles. On American Spring, theyâ€™ve embraced the pop. Hell, even the artwork shows it, by far the prettiest cover in their discography. But donâ€™t fret, the spirit and rebellion at the heart of the band is still there. Just because the album is riddled with hooks, doesnâ€™t mean Anti-Flag have lost their edge.

American Spring opens with a bang. â€œFabled World" reminds you what you loved about this band in the first place. The energy never lets up and really hits its stride with â€œBrandenburg Gate,â€ easily the catchiest song ever written about an 18th century German landmark. Thereâ€™s not a ton of bands who can make a line like, â€œI lost my baby to a foreign warâ€ as instantly catchy. This is where Anti-Flag really shines: the perfect combination of political and poppy. Justin Sane and Chris #2â€™s voices sound revitalized following 2012â€™s tonally darker The General Strike.

If youâ€™ve ever bought a physical Anti-Flag record (and at this point, there are probably plenty of you that have not), you know the group often fills their booklets with facts, essays and quotes putting the songs in context. I encourage you to check these out, as they are often informational and unfortunately a reflection of our society. The more the world goes to shit, the more these guys have to scream about. â€œSky is Fallingâ€ is a perfect example. The hook is instantly memorable but the drone theme inspires a deeper discussion. â€œThere is no past or future when the sky falls downâ€ is somehow anthemic and terrifying in the same breath.

Twenty years into their career, itâ€™s incredible a band can make something so relevant. â€œSet Yourself on Fireâ€ seems to be their battle cry. A song that encompasses plenty of their beliefs but also encourages individuality and never settling for less. Well, these guys sound as vital as always. A band like Anti-Flag already has a loyal following. They are old enough to be a band you â€œhavenâ€™t listened to since high school,â€ but American Spring is reason to catch up. This isnâ€™t a throwback record or something to be overlooked. Itâ€™s a record made by a band who just got an injection of adrenaline. Who are still making the music they want to make. Who arenâ€™t getting less relevant as we head into another election season. American Spring is a great record. Do yourself a favor and give this a chance, and Iâ€™ll see you in the pit screaming along.

Underground Railroad to Candyland: The People Are Home