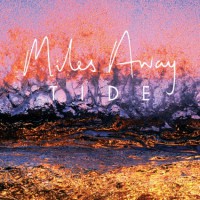 Miles Away recognized calls to improve from critics over the last couple years -- some of which I felt were harsh. In fact, they were downright unjustified given the fairly decent account these Aussies gave of themselves on albums like Endless Roads and Consequences. But I can't deny that something was missing. That extra kick. Tide is just that as it enlists the aid of friends to help produce a record that takes the best of what they've done in the past and amplify it while still working out the niggles here and there. Is it devoid of flaw? No. Is it a step up? Very much so.

They feel more post-hardcore/screamo oriented this time around with much more of a sound clash between Defeater, Caravels, Departures and The Saddest Landscape coming to light. In fact, ex-Defeater drummer Andy Reitz hammers away on the kit (which is undoubtedly one of the best aspects on the album) while there's a guest spot from Bane guitarist Zach Jordan on the mic. It shows how much thought went into making Tide more wholesome. They do well to shake the nondescript tag a lot of folks harshly dropped on them in the past with tracks like "Grateful" showing the mark up in their music. It's a mix of melodic/punk/post-hardcore that hits the right spots. The guitars are impressive and lay the groundwork for Nick Horsnell's raw, isolated screams.

The band's in their 13th year so it's still a toss-up as to how much inventiveness to expect from this record. I didn't expect much personally and it worked in my favor. On jams like "Entitlement," the dynamic guitars of Cam Jose are made that much sweeter by the gang vocals, which really should have been deployed more on the record. Miles Away come off so confident and self-assured when placed under this kind of emphasis. No worries though because on tracks like "Port of Call" and "Balance," this sense of urgency's restored and would definitely bode well for fans of Pianos Become The Teeth. They feel like power songs about resistance and perseverance which are labels many fans would associate with Miles Away.

As the slower but equally potent "Undertow" rounds off things, it's very obvious how much Miles Away put in. They kept true to their old essence but still shifted things up just enough to make the album truly appeal across the board. Some songs don't register as much but the ones that do really have quite the draw to them. Looks like Australia's got a hardcore horse in the race once more. Years of hard work are showing fruition and I'm glad because Miles Away feel more than just a labor of love.

Underground Railroad to Candyland: The People Are Home