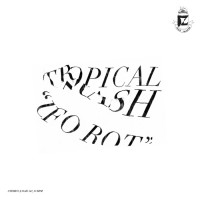 The debut album from Tropical Trash plays like a career overview of a punk band. The album starts out simply enough, with songs that are all snarl and spit with seething vocals. Chugging mid-tempo tracks slowly take over in the middle of the album and stretched out, 8 minute plus jams finish the album out. Think Black Flag's evolution from thrashing hardcore to sludgy, oddball exercises or Unwound's change from screeching post-hardcore to chamber influenced slow dirge experiments. The slow change may read like an identity crisis or the work of a group of musicians that cannot make their minds up. The album plays like a band who realizes there's solid potential in all of those song forms.

Openers "New Flesh" and "DNA Smoke" serve as introductions to the album's sound, including their short form experimentation and the band's dueling vocalists. The album's title track is all start-stop fury and ironic humor delivered in a razor sharp Southern drawl. The use of noise and synthesizers on these tracks help keep this section of the album from becoming sonically repetitive. Tropical Trash's sense of playfulness can bring to mind A Trip to Marineville era Swell Maps, which, coming from yours truly, is no small compliment.

After Tropical Trash introduce you to their brand of warped garage punk tunes, they pull the rug out from underneath your expectations with "Knowing" and "Pink Sweat." "Knowing" sports droning guitars and evolving percussion, pulling back and forth from the brink of fury effortlessly. The song picks up and loses speed across its sprawling 9 minute running time, yet it never gets tiresome. Album closer "Pink Sweat" opens with a deep, tangled bass line that wouldn't be out of place in David Wm. Sims' playbook. The songs starts with a nervous audacity and only explodes from there.

Tropical Trash are able to play these songs with confident ability, able to switch things up without skipping a step or losing a breath. Any doubters can turn to "Leisure Exposure," where the band flexes their dynamics seamlessly. Some may say this release is scatterbrained and unfocused, but that only adds to the appeal.

Dany Laj and the Looks: Word On The Street