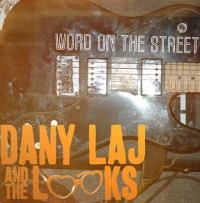 Dany Laj and the Looks

Dany Laj is a Canadian rock n' roller who, like his forefathers Nick Lowe and the Vibrators, knows how to not overstay his welcome. His new album Word On The Street is a fun, joyful record, a power-pop punk romantic's memoirs instilled into melodies - love, heartbreak, living only for music, working for the man, y'know, all that stuff. If you like the period in British punk where pub rock and the new Ramones-inspired bands met I guarantee you'll like this one. The songs here are mostly fun, hooky, and genuinely joyous, like the Exploding Hearts, Ted Leo, and Marvellous Darlings (to whom Dany Laj may owe a debt in terms of his clipped, slanted vocals). Laj and the Looks sound invigorated just to be able to put the tracks down on tape.

As much as the sound is classic British power-punk, it's always buoyed by additions and bits of tinkering, like the male/female duet on "Woody/Dreamers" or the lovely female harmonies throughout Word On The Street. Perfect opener "Small Town Kid" (my favorite on the album) is massively boosted by "Radio Radio" style organ fills, and it tells a story of the punk kid we've all been: torn jeans, big dreams, and nothing in life but music. One of the reasons pop-punk works so nicely in tune with poverty and romance is that the melodies can be packed even when they're purposefully limited to two or three chords, and that's true here - for instance, how the guitar playing here is sharp and tuneful, like the solo on "We Know": the guitar styling here of playing the chief melody then cycling back to the verse is a lost art that Laj picks up again like he was born to it.

However as much as I like Word On The Street, I'm not in love with it per se. Some of the songs can be a little monotonous and one-note, like the ska-tinged "Where's The Love", which can be death to a power-pop band. And I wish there was more of a poetry to the lyrics - "The man at the hall wants to be humorous/all he ever does is feed us with bullshit." It's fine but the songs would be that much better with sharper wording. I can't say it's an instant classic even though I enjoyed it song by song, but this is certainly a band to watch. "Small Town Kid" is pretty damn exhilarating on it's own and shows that Laj is capable of great music. And I have to appreciate an album where the closer "Carl le Fou" is entirely in French, making me regret forgetting my three years of French incredibly quickly. If you're a punk with a penchant for Ted Leo and longing for some decent harmonies after years of bands yelling in your ear, pick this up.

PJ Bond: Where Were You?