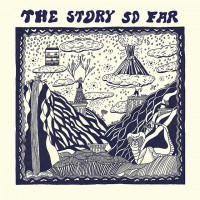 The Story So Far is back with their signature gritty pop punk on their self-titled third album. The band brings back the intensity, the gritty guitars, intricate drumming, and angry distinct vocals. The album ultimately follows the format that The Story So Far have perfected, but the album takes that sound and fluxes with it, proving that the band hasnâ€™t lost much of their touch.

One thingâ€™s for sure, Parker Cannon still has fire in his sunken chest. Heâ€™s managed to write lyrics that over the span of three albums have been lyrically different while keeping consistent themes. While the topic of girls and teenage angst has lessened a bit, the themes are still relevant on songs like, â€œSmileâ€ and â€œHeavy Gloom.â€

â€œHow You Areâ€ is the most perfectly composited song on the record. It begins in the style of Songs Of, the acoustic rendition album released last summer. The song then takes an energetic leap into TSSF territory, but a much more amped version of the bandâ€™s signature melodies.

â€œPhantomâ€ continues the softer side of the record and is beyond anything the band has done before. Itâ€™s the most experimental The Story So Far song since 2011â€™s â€œPlaceholder.â€ The song is extremely ambient and offers a little more into Parkerâ€™s singing abilities.

The bandâ€™s artistic ability has ultimately grown and have pushed the sounds of their previous record, What You Donâ€™t See. The band has upped their songwriting game while still pertaining into the sound the band has perfected over the past four years. The band has managed to concoct their melodic pop punk with extremely powerful rhythm, just listen to â€œSilo,â€ trust me.

PJ Bond: Where Were You?