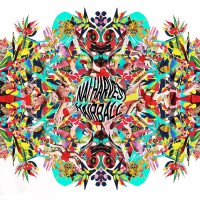 Nai Harvest are one of the most underrated acts around at present. 2013's Whatever had a very intriguing mathy-emo feel to it which made 2014's Hold Open My Head that much more interesting as it moved into a '90s sludgier-pop vibe. All in all, you sensed how well this two-piece could duck in and out genres while still maintaining a rich essence and overall, a thick, vibrant sound. They're never short of energy and Hairball reiterates this. It's a record chock full of garage-punk jams with a British flavor which leaves you craving summer.

Hairball is their most open, breezy album to date. It feels so free, careless and reckless. From the openers "Spin" and "Sick On My Heart" it's quite clear how unpredictable things would be panning out. The garage-punk vibe I mentioned above's so poppy and at first, I thought it could well be the middle ground between their alternating styles on the last two records but as the album progresses, it becomes something of its own. Much more distinct and authoritative as it reminds you how well and how many musical hearts/influences are worn on Nai Harvest's sleeves. At times, it's a tad convuluted and some tracks do feel like repeats of each other, but overall, it's nothing too detrimental to the record's quality.

It's very indie and honestly, while I'm not a big fan, it does seem to follow musical patterns from Wavves but with a bit more chutzpah. Ben Thompson's muffled vocals and Lew Currie's fervent kitwork continue to meld oh so well that you can't help but nod and tap to the hints of summer they seem to be riffing off. It's a melodic throwback to The Cribs' album from earlier this month, which reeked of British indie bravado as well. If you think I'm kidding about the crafty little flair and dynamic on display this go around by both gents though, then jump into "Gimme Gimme" and the self-titled closing track. They're stark examples of songs on the album which subvert almost every aspect of Nai Harvest's style thus far -- lyrically and musically. And ultimately what this does is leave you eager to see which gear they shift into next.