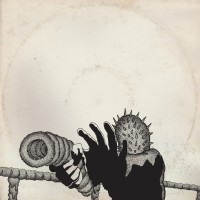 Thee Oh Sees were on a pretty hot streak for a bit. I say "were" because their last album, Drop, was less than stellar, to say the least. Their first album under their current moniker, The Master's Bedroom is Worth Spending a Night In, reveled in band leader John Dwyer's particular brand of warped psychedelic garage rock. His sensibilities twisted and evolved over the course of six more albums, culminating in 2013's excellent Floating Coffin. The lineup changed, basically losing everyone but main man Dwyer, and the band released Drop, which lacked the energy and forward momentum that made their past albums so thrilling. So, with Mutilator Defeated At Last, John Dwyer has to prove that he can keep that energy going with a new group of backing musicians (though past member Brigid Dawson does return for this album). I am happy to report that after last year's misstep, Thee Oh Sees have returned to form, offering up a solid set of rollicking and infectious tracks.

"Web" starts off with a steady, measured beat before erupting into a familiar erratic, funk-influenced beat. Right off the bat, the new rhythm section, comprised of Nick Murray and Tim Hellman, prove that they can hang with John Dwyer's seasoned guitar acrobatics. The following tracks offer up the expected staples of this band's songcraft, including motorik drum beats and Dwyer's signature yelp. The album also sees the band scraping back the fuzz a bit and making room for warm synth tones and psychedelic touches throughout. This is not to imply that these characteristics were absent in the band's past albums, just that they are sonically pushed to the front here. This album feels warm and comforting when it isn't too busy pumping slimy guitar riffs and curdled screams into your veins.

Past member Brigid Dawson smartly takes over the lead vocals on "Turned Out Light," which features a guitar line that would not sound out of place among what you might hear on your local classic rock radio station. "Lupine Ossuary" stays close to the band's Neu! influence, featuring a driving beat that Dwyer's guitar can happily scribble and screech over. "Sticky Hulks" and "Holy Smoke" showcase Thee Oh Sees' strategically used soft and somber side, slowing the album down a bit from it's frenetic breakneck pace. Knowing this band, it's really just the calm before the storm, as subsequent track "Rogue Planet" burns your house down before spitting the ashes back in your face.

Thee Oh Sees have a daunting discography. What else can you expect from a band who's announced hiatus lasted about, oh, two months before resuming their (at least) one album a year pace? Mutilator Defeated At Last can serve as a more than solid starting point (so can Carrion Crawler/The Dream or Help or Putrifiers II...). For others experienced with Thee Oh Sees, this album will have you salivating as it provides more fodder for their incredible live shows.