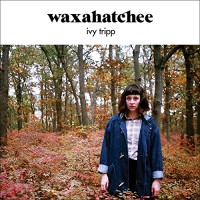 The first two albums from Katie Crutchfield's Waxahatchee project opened with lightly plucked guitar and Crutchfield's wispy, hushed vocals. The first sound heard on Ivy Tripp, however, is a chunky sounding organ/synthesizer hybrid. One could assume this would mean the album will be an unfortunate change of pace, with the songs feeling colder and less intimate. Any feelings of that nature quickly disperse once Katie Crutchfield's familiar coo enters the picture, melting the iciness of the synthesizer with her warm vocals. Waxahatchee albums often sound like the conversations you have in your head while taking a shower. The lyrics have a striking resemblance to the well thought out and perfect responses you could have used in conversations that took place days, weeks or even months ago. Her words about relationships and those she surrounds herself with often feel like privileged information, but they never cease to be infinitely relatable. The production on American Weekend made it seem like these thoughts were being whispered in your ear. Cerulean Salt felt like a private conversation and the (relatively) lush Ivy Tripp can sometimes feel like you're hearing Crutchfield tell a story for the tenth time to a room full of strangers. Her words start to sound vague and, well, plainly repetitive.

They lyrics were the dominant presence on the past two records, but here the instrumentation gets to share a fair amount of the spotlight. Katie Crutchfield is in the center of a cluster of constantly collaborating Philadelphia musicians (bands like Swearin, The Goodbye Party, Great Thunder, and Radiator Hospital seem to be constantly swapping and sharing members). It's no surprise that many of them appear on Ivy Tripp, contributing to the album's more involved and varied arrangements. When talking about recording the album at her new home in Long Island*, Cruchfield said "We can wake up and start working. We could try weird stuff and put mics in weird places, like put the keyboard in the garage and see how that sounds." The experimentation is on display with eclectic songs like the ominous "Air," the minimalist pop on record highlight "La Loose," and the uptempo Flying Nun Records worship found on "The Dirt."

"And I try to preserve the routine" sings Crutchfield on the album's catchiest song, La Loose. "And I know that I feel more than you do" she admits outright later in the song, yet she isn't quite able to prove that with most of the lyrics on Ivy Tripp. Crutchfield reminds the listener of the directionless and emptiness she feels, but after the first handful of songs, the theme quickly loses its luster. Luckily, songs like "Stale by Noon" and "Half Moon" are spread on the tracklist, both of which lyrically recapture your interest. "Stale by Noon" plays out like a compromise between Ivy Tripp's new direction and the confessional nature of Cerulean Salt. The song is able to introduce new sounds previously unheard on a Waxahatchee record while maintaining the confidential tone of the last album. Instrumentally, keyboards, pianos and 12 string guitars abound. While the lyrics can falter now and then, the varied instrumentation more than picks up the slack. From the slow, crawling build of "Air" to the jaunty and stuttered "Grey Hair," Ivy Tripp finds ways to both sonically surprise and delight.

In the previously referenced interview, Kate Crutchfield stated "I guess Ivy Tripp sort of applies to the people who wander around and try to figure out what to do, and whether that makes people happy or not." That is undeniably the theme of this record, but the album can stall when the lyrics lean on that theme a little too much. Fortunately Crutchfield was smart enough to back up her usual crippling honesty with more adventurous music, creating her most pop oriented album to date. While this album is undeniably enjoyable, I can't shake the feeling that it is simply a transition between Cerulean Salt's excellent intimacy and a new, more ambitious Waxahatchee record yet to come.

Zounds: The Curse Of Zounds