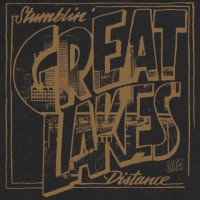 Boston's Great Lakes USA were already pretty fucking good before the addition of No Trigger guitarist, Mike Przygoda, to the mix. If ever there was a move to kick things up a notch, this would be it. 2012's Live Fast, Die Whenever was an album that came out of nowhere and really stuck with me. It was one of that year's most solid pieces of punk rock and if you were into that record, then I can assure you that you're in for a treat here. These six songs offered on Stumbling Distance are a brilliant follow-up and definitely highlight how they've gone from strength to strength.

It's a dynamic EP that continues to flavor the band's pop-punk sound as one that's grittier and hard-edged. The skate/thrash vibe runs wild on the openers in "The Best Band At O'Brien's" and "Crows", which will definitely connect with old fans. It's them sticking to their stylistic guns and really doing so with ease. Both are fast-paced, short-bursts of energy that have new riffy elements to it, courtesy of Przygoda. He helps the dynamics of the record and more so, allows vocalist, Alex Heinz, to explore his range even more - which he does to full effect. His strained shouts help to create that atmosphere of loud punk statements as opposed to simply trailing off the guitars and Mike Doyle's frenetic kit-work. The interplay of all the band members this time around is much more crisp and the production feels much more tight, stepping up from the ragged feel of Live Fast, Die Whenever. These subtle leaps forward (such as Przygoda's antics) help create a new dimension for the band, which won't hurt at all in the long run.

You get an even bigger sense of the band's versatility on "Aim So Low" - one of their less abrasive and poppier anthems. You don't get that feel of catchiness from them that often so tracks like these are appreciated a lot when they crop up. It's a nice change in tempo that slows the record down and allows some breathing room. It's also one of the few tracks where you actually get to hear Pete Hoffman's base shine, which was one of my minor concerns on the record. He wasn't as dominant and imposing as the last record which had much more thick, crunchy bass-tones but this is something that can be overlooked because everything else is on the button. When everything else ticks so well, this mini-issues really won't matter much.

As Heinz takes the rest of the album to scream his guts out, the band keeps reminding you how dirty yet melodic they can be. How? Well, by shoving a plethora of explosive, hook-laden bangers in your face. Bangers that'll sure leave you craving more and if you're a huge fan like me, you'll be left with a deep sense of fulfillment in the promise that their last album offered. Great Lakes USA show once more why you need to add them to your radar!