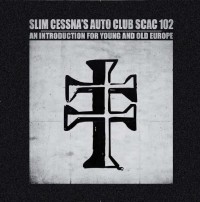 An Introduction for Young and Old Europe (2015)

I havenâ€™t had an experience listening to a new band for the first time like this in quite a while. Maybe the onus is on me, but a lot of new music that comes my way can usually be pretty easily put into a genre box or series of sub-genre boxes: this is punk, thatâ€™s folk, this hereâ€™s folk punk, this is hardcore, etc. My brain now automatically registers new music by genre immediately on first listen. But when I pressed play on Slim Cessnaâ€™s Auto Club's An Introduction for Young and Old Europe, my brain couldnâ€™t place it. My instant reaction: Iâ€™m not sure what this is, but I like this a fucking lot.

Slim Cessna and gang are labeled â€œgothic Americanaâ€, probably for the sake of convenience, but thatâ€™s pretty limiting in terms of what they actually play. They do serve up a creepy country-western sound in large rations that rivals some of the best in Murder By Deathâ€™s discography. But the bandâ€™s range goes beyond that, hitting twangs of bluegrass and hillbilly folk, rock and roll, spirituals, and stranger categories that are harder to recognize. The focal point of all songs on the record is the interplay between the two vocalists, Slim Cessna and Munly Munly. They seem to represent good and evil, respectively, and spend each track trading lyrical tales, harmonizing, and doing some good old-fashioned storytelling. Iâ€™d go on, but I suggest just reading the biography on the bandâ€™s website; it provides a taste of the bands goofy, horror-show carnival style and is one of the more entertaining bios Iâ€™ve ever read. It includes a fitting Jello Biafra quote: Slim Cessnaâ€™s Auto Club is â€œthe country band that plays the bar at the end of the worldâ€.

An Introduction for Young and Old Europe is a retrospective of a ton of material from the bandâ€™s twenty year existence, and as such, itâ€™s long (an hour and eighteen minutes to be exact), but the bandâ€™s sound is so distinctive that it feels pretty cohesive and never drags. The opener, â€œThis Is How We Do Things in the Countryâ€ is itself an appropriate introduction to how the band does things. Itâ€™s a gothic country song thatâ€™s fast-paced and twangy, recounting the narratorâ€™s murderous proclivities. Other highlights include â€œChildren of the Lordâ€, an eerie take on the classic childrenâ€™s praise song, and â€œHe, Roger Williamsâ€, a goofy shuffle exploring the life of the Protestant theologian. God, the devil, and spirituality are all heavily surveyed on An Introduction for Young and Old Europe, but youâ€™re never quite sure where the record and band stands as a whole. Is this a Bible-thumping Christian record? Is it a mockery of Christianity? Most likely, itâ€™s simply an examination of heavy religious ideas for theatrical effect. Any way itâ€™s sliced, the record is creepy, engrossing and enjoyable.

The double LP comes with a DVD of the bandâ€™s 20th anniversary live performance at the Lionâ€™s Lair in Denver, and itâ€™s quite possibly as essential as the record itself. Though the record is phenomenal, the bandâ€™s live show clearly seems to be its greatest strength. For the uninitiated listener like me, it places the music in context of the bandâ€™s carnival-esque performances and puts a creepy face to the haunting voices of Slim Cessna and Munly Munly. Itâ€™s also just a terrific live performance, decently captured, and with commendable sound quality.

Slim Cessnaâ€™s Auto Club brings a good deal of theatricality into the music they perform, and it results in a strange and enjoyable masterpiece that expands the confines of gothic-Americana. An Introduction For Young and Old Europe is the perfect introduction to the band itself and a great escape from the limits of genre definition.