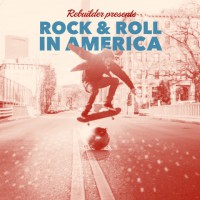 Is there such a thing as mature pop-punk? If so, then Rebuilder are one of the best bands doing it. Their 2013 self-titled EP was a pleasant surprise and showed they had the chops to go far. Two years down the line and it seems that they've decided to explore a bit more and open up towards a sound that's a bit more dynamic than Rebuilder -- and in doing so, they show that they're fully ready to travel the long road and make it theirs. This album's more wholesome and feels like a sonic shift in the right direction -- one that's riskier and bolder, but still cultivates a sound that doesn't shy away from the melodic punk prominent on their previous stuff. Rock & Roll In America is rife with passion, charisma and ultimately, it's a big move up for this Boston-based unit.

Rebuilder are all about catchy hooks, huge choruses, singalong sprawls and the whole nine; but it's something as simple as an organ that makes so much difference. The last record was a bit scrappy (and this helped the production) but the cleanness and tightness of Rock & Roll In America's production adds that extra flair as they chisel away at something more spectacular. And it's a resounding success. The first two tracks, "The National Bohemian" and "Look What You've Done," are great reference points for this. They feel more creative, full of ideas and are technically sound without ever getting too cheesy or poppy. The music feels fleshed out more as it leads with strong vocal harmonies, melodic choruses and upbeat guitars. There's an enormous vibrancy in these songs with Sal Ellington's vocals sounding subtly like Mark Hoppus at times, but much more focused. In fact, a couple parts instrumentally remind me of Restorations, giving the album a nice mystery to it.

It's no game changer but the assortment of songs form a good mix and one that keeps you engaged because there's so much spunk yet it's a punk album that isn't bogged down by any jaded views or tones of cynicism. I think it's this inviting nature of Rebuilder that lures you in as they spread a lot of uplifting, inspirational and positive messages in their music. The organ-heavy "Heart Attack" and the guitar-distorted "Adult" all help build the record's character, and more so, a distinct personality, as they clash. Sure, a few songs contrast but it's really good to see how Rebuilder deal with this duality. This debut full-length is obviously influenced by a lot Americana rock & roll but a huge plus is how they fuse these classic rock elements with aggressive fits of punk. Ellington's vocals are really memorable and hit the mark with each and every note, acclimatizing to whatever turn the guitars take, fast or slow, and again, how he matches these pop-punk tempos is something to stand up and take note of. It's similar to quite a few pop-punk bands out there, in terms of grit and being rough around the edges, but Ellington really helps even things and add balance with his versatility on the mic.

As "Empty Streets" takes its ballad route, another thing to note is how the songs flow into each other. It drives into the punk fiesta of "When I Grow Up" so seamlessly, on an album that has quite a few strong moments. It'll be interesting to hear them expand on this, musically and songwriting, as they trudge on because they've set a high standard for themselves here. As the record closes, you get more shots of sociopolitical commentary (but nothing too preachy) as Ellington goes on about culture and society. However, he smartly conveys his points by sticking to the building blocks of all climates - family and friends - to paint the bigger picture. And as things end, it's clearly one of a better world. "American Dread" signals the close and is their biggest anthem to date. A pop-punk jam to shout along, sing along and one that's typical of Rock & Roll In America - very inviting and one that'll surely warm your soul as it delivers one of the biggest doses of heart and soul this year.