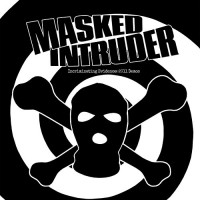 Masked Intruder is inarguably one of pop-punk's biggest bands at the moment, but before they broke out and stole your heart (see what I did there?), they did what most bands do -- they recorded some demos. Recently, the fine folks at Red Scare Industries decided to share a helping of those demos with the world in the form of Incriminating Evidence: The 2011 Demos, which was released digitally and on 7-inch vinyl on Record Store Day 2015. The demos certainly don't break new ground -- why would they? They do, however, showcase a band that even at this early point was clearly confident in its sound and ready to make an impact.

One of the first things that stands out as the 7-inch kicks off is the production. When most listeners think demos, they think grainy recordings and muffled vocals that were never meant to see the light of day. However, in the case of Incriminating Evidence the production is suprisingly strong. These aren't just demos meant for superfans and completionists -- more casual fans can enjoy them, too.

And enjoyment is almost guaranteed. Three of the four tracks come from the band's first two acclaimed records. Even without the final bit of polish the album versions offer, "How Do I Get To You," "I Fought the Law (but the Law Beat the Shit Out of Me)" and "I'm in (Unrequited) Love" all rock just the same. "I Plead the 5th" won't be as familiar to Masked Intruder fans, but it fits right in with the rest, and its chorus is likely to make itself at home inside your head.

As mentioned previously, there's nothing groundbreaking here, but there really doesn't need to be. At this point, everyone knows what Masked Intruder is about, and hearing a band that, even early on, knew exactly what they wanted to do is both satisfying and refreshing. Unlike many throwback demo releases, this one is recommended.