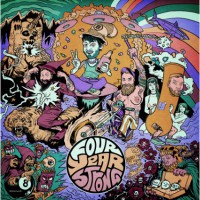 I have to admit, I was a tad skeptical about Four Year Strongâ€™s new release. I was a naÃ¯ve to the fact that the band was returning to form after their major label, In Some Way, Shape, Or Form wasnâ€™t well received. It didnâ€™t really feel genuine enough for me and Go Down In History fell a tad short of my expectations. It seems like the band was saving the best for last. Four Year Strong isnâ€™t a return to form album, itâ€™s a retaliation to any doubt that fans like me had. The album is the heaviest and possibly most well written Four Year Strong release to date. The album has a complex variety that melts very nicely throughout the album.

Itâ€™s hard to even begin when every song is aggressive, heavy, melodic and poppy all at the same time. Every song on Four Year Strong is an absolute banger. The band stands to reason with the fact that theyâ€™re not returning to their sound, just building off of it. â€œWe All Float Down Hereâ€ and â€œStolen Credit Card!â€ are excellent example of the bandâ€™s returned energy. These songs are definitely a good reintroduction to the progression of Four Year Strong.

The band has also revamped their goofy song titles and crazy album artwork. Songs like, â€œWipe Yourself Off Man, You Deadâ€ and â€œHereâ€™s To Swimming With Bow-legged Womenâ€ have goofy titles, but as always, the band delivers solid tracks with catchy choruses and newer vibes for Four Year Strong. â€œWipe Yourself Off Man, You Deadâ€ goes into new territory for the band while still maintaining their sound. The songâ€™s eerie intro riff definitely makes the song memorable and one of the best on the album.

There are some songs that are not as strong as others and while still following the core of the bandâ€™s sound. The rest of the album almost makes â€œEating My Wordsâ€ feel like filler.

The albumâ€™s general flow is great though. This is certainly an album for fans to enjoy as summer approaches. Whether its mixed with the rest of the bandâ€™s discography or just played on itâ€™s own, the album is easy to listen to from beginning to end. Especially the epic closing on â€œThe Sound of Your Heartâ€ leading into â€œGo Down In History.â€ Just when you think the band is going to close the album, they lead it into a song from the eponymous 2014 EP seamlessly tying the album to a close.

Four Year Strongâ€™s new album is certainly a contender for top 10 of 2015. The album hits a lot harder than expected and the heavy melodies the band creates are a great progression from the Easycore genre. With hard hitting riffs, plenty of sing a longs, and clever songwriting, donâ€™t let this album slip past you this summer.