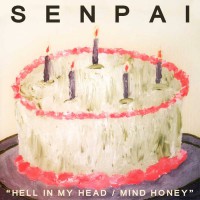 Senpai features two members of the band Pity Sex and this side project does not stray too far from that band's sound. Simply pull back some of Pity Sex's vocal cooing and hazy instrumentals and insert more Weezer Blue Album influenced guitars and you have Senpai. Armed with slow churning riffs and on the rise producer Will Yip (Paint it Black, King Sunny Ade, La Dispute), Senpai find themselves trying to strike out on their own and establish a distinct sound.

Will Yip was presumably chosen to record these two songs because he worked on Pity Sex's debut album, but I can only assume his work with Braid influenced that decision as well. Echoes of Bob Nana are certainly present here, from the stuttered instrumental dynamics to the occasional vocal inflections. Granted, a lot of 1990s era Jade Tree bands can be traced to these songs pretty easily as well, so Senpai aren't exactly shy about displaying their influences.

"Hell in My Head" was wisely chosen as the A-side, as it contains the type of effortlessly catchy hook that subtly struts into your head and doesn't leave without putting up a fight. Granted Senpai aren't exactly experimenting with a rare formula here, but the song is a solid introduction to what this band is trying to do. "Mind Honey" stands on shakier ground than "Hell in My Head," unfortunately. It definitely leans a little too hard on the toss off/slacker aesthetic and sounds phoned in. The sudden stops during the chorus attempt to take its monotone delivery and shape it into a hook with unsuccessful results. Nevertheless, the verses contain a head bobbing mid tempo beat that the listener can latch onto.