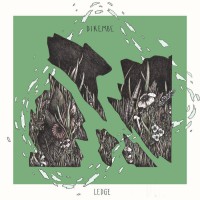 Some bands gradually tease their shift in sound, cleverly placed over a period of time. Ceremony's one band that pops to mind. Pianos Become The Teeth also did it between full-lengths, as did Title Fight. Then, to use another recent example, some bands just drop it left-field, as seen with Superheaven (formerly Daylight). Dikembe falls into the former's territory as they shifted their trajectory from the indie/punk scene into a more reclined '90s state of affairs over the course of three years. While Broad Shoulders and their earlier work packed a lot of vibrancy, from Mediumship onwards, you could sense them slowing down the ship, steering into calmer waters. Ledge is the exclamation mark of this transition and one which I find myself surprisingly latching onto, given that I found Mediumship to be a tad formulaic. These four tracks carry on in a similar vein but there's a stronger, more content feel that seems to have been brought on by experience, which Dikembe have smartly channeled into a sound that isn't anything revolutionary, but one they're intent on breaking the mold with.

"Worst In The Fury" and "Surfed In The Loft" are examples of how their approach has slowed down, tempering off and evolving with age. This Gainesville bunch sound much more assured and confident as they reduce the buzzy energy of records old. In these tempos, both tracks fit into each other's intimate lyricism while retaining the core aspects of Mediumship, which I dug back into and found that I was actually pretty harsh on the first time around. These songs are more mature and you sense the band willing to dial things down to allow the audience to breathe and ingest more, as opposed to the in-your-face, infectious energy of old. Most of their music now is more spaced out because the lyrics are more wholesome and mature, to say the least. Of course, the noodly guitar wraparound on the end of "Worst In The Fury" showcases that they still have room to flex out technically as they did on earlier albums.

"Teeth In The Sink" brings with it a '90s grunge intro (for fans of Balance and Composure and Citizen) but ends up being a slow-burner a la Brand New. This also ends on a climaxing solo but one which deviates from the indie/punk norm we'd usually associate them with. It helps emphasize that Mediumship was the bridging point to dropping the curtain, revealing the older and wiser Ledge. As the 7-inch winds down, Dikembe reattach to the style of old with "Guts In The Brush"; a track that would definitely align itself alongside fans of Prawn. It has that DIY flavor which they began their journey with and helps show the change they've made.

Is it a permanent one? I don't think so. It feels more experimental but most importantly, it feels like they'll be dancing in and out musical styles and influences for some time to come. I'm cool with that because I think this is one band that right now doesn't need a distinct sound to show what they're capable of. They've impressed the majority of times I've listened to them and I trust that whatever they do next, it'll be another calculated and rewarding step forward.