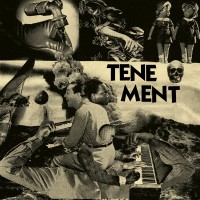 Appleton, Wisconsinâ€™s Tenement have followed up their amazing 2011 album Napalm Dream with a double-LP in the form of Predatory Headlights, 25 tracks of rock nâ€™ roll goodness interspersed with moments of the straight-up avant garde. Claiming such eclectic artists as Ruth Crawford Seeger, William S. Fischer and Robert Kirby as influences, this new Tenement album delves into weird, moody territory, yet the guitars still come heavy, and the jams still find themselves kicked out in glorious fashion. One thing is clear, however -- Tenement are not content with with being just another average punk band.

From the very first tinkering, dissonant notes of piano accompanied by the eerie droning of cellos in album opener â€œTheme of the Cuckoo,â€ Tenement aim for a more visceral listening experience with Predatory Headlights. Itâ€™s an emotionally cold opening that bursts apart with an explosion of poppy guitar, as the rollicking â€œCrop Circle Nationâ€ begins. A strange dichotomy is achieved on this album between that which is melodic and poppy, and that which is dark and atmospheric. It is jarring, and for the most part it works to lend Tenement a certain depth of artistry that many contemporaries are unable to bring to the table. It ultimately serves to make Tenement a more interesting, complex musical entity.

When it comes to the rock nâ€™ roll side of Tenement, classic rock plays a primary influence. A certain playfulness is apparent in Amos Pitschâ€™s guitar lines, as the band riffs off each other like true musicians interested in the subtleties of musical interplay. This experimentalism can most notably be found in the lurching discordant notes that toss about the relatively straightforward pop structure of â€œDull Joy." On album highlight â€œGarden of Secrecy,â€ a Thin Lizzy influence is strong, while many of the rocking songs display an old-school, guitar rock touch in this vein. But rather than mining the past in an ironic or exploitative way, as many chic â€œretroâ€ bands these days are known to do, Tenement come across as true students of rock history, with a genuine respect for the classics, as songs such as "Whispering Kids" and "You Keep Me Cool" display. Still, there are modern touches integrated within, primarily in the strong Dinosaur Jr. vibe that still characterizes much of their sound. â€œUnder the Storm Cloudsâ€ blends signature heavy-toned guitars with poppy melody, while â€œCurtains Closedâ€ is a toe-tapper of the highest order. "Near You" is a particularly rocking tune towards the tail end of the record, and shows that Tenement are still in touch with their punk side when they want to be.

The more avant-garde tracks on Predatory Headlights slow down the proceedings, sometimes to the albumâ€™s detriment. â€œAnts + Fliesâ€ is a sparse, five-and-a-half-minute piano track that isnâ€™t particularly engaging, while â€œA Frightening Place for Normal Peopleâ€ is an almost ten-minute long instrumental song that would fit in well on one of the weirder Tom Waits albums. While itâ€™s easy to appreciate their penchant for experimentation, the tracks run long on an already lengthy album, and potentially test the listenerâ€™s patience.

Predatory Headlights is a great addition to the discography of one of the sceneâ€™s more exciting and talented bands. Tenementâ€™s keen balance of pop sensibility with more substantive tones, atmospheres and instrumental interplay lends their sound uncommon depth. While a bit of fat could maybe have been trimmed from Predatory Headlights, it certainly will rank as one of the better, more interesting rock offerings of 2015.

Matt Skiba and the Sekrets: Kuts