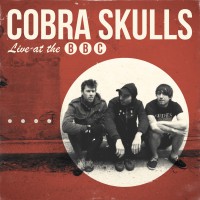 Itâ€™s been a few years since Devin Peralta, Luke Swarm and Tony Teixeira hung up their cobra skulls and moved on from the band. After three studio albums, a slew of EPs and and hundreds of thousands of miles in shows, the trio (and a quartet in a previous incarnation) put Cobra Skulls to bed in 2013. But, with the coming and going of the most recent Record Store Day, the folks at Red Scare Industries dug up a final nugget for the Cobra-fans, in the form of Live at the BBC.

The four-track release paints a furious end to the bandâ€™s career. Exploding out of the gate with â€œH.D.U.I.â€ and â€œRebel Fateâ€ (both from 2009â€™s American Rubicon), the trio plays the songs faithfully and raucously, but without any real variation from their original recordings. Vocals sound a bit more ragged than previously in the studio (no surprise given the bandâ€™s frenetic touring schedule), continuing into the third track, 2011â€™s â€œSolastalgia.â€ Sadly, the bandâ€™s 2007 full-length debut, Sitting Army is completely ignored.

The real find on this final Cobra-release is â€œNew Age,â€ a fiery cover of the 1982 song by British punks Blitz. Surely a special treat for the listeners at â€œthe Beeb,â€ it is the EPâ€™s highlight, and the enthusiasm the band displays in its playing is evident. With the songs being â€œlive in studio,â€ there arenâ€™t issues with sound quality that can plague so many other live releases.

But itâ€™s not like the BBC doesnâ€™t know what theyâ€™re doing with these sorts of releases. They had plenty of practice with the Beatles, Thin Lizzy, Motorhead, The Damned and many many more. If this proves to be the final release that the trio puts out as Cobra Skulls, thereâ€™s a nice little souvenir to be had for fans.