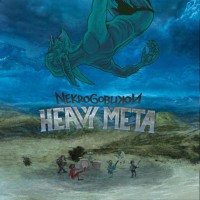 In case you didnâ€™t know, Nekrogoblikon is a symphonic metal band that includes a goblin that likes to party. Honestly, if you like goblins and/or heavy metal and/or parties (I like all three) itâ€™s pretty great.

The bandâ€™s third full length, Heavy Meta lets us know through the title alone that the band is in on theâ€¦ inherent ridiculousnessâ€¦ of a party-loving metal goblin. Itâ€™s also their most fully formed peace to date. At its core, the album is classically symphonic metal. Soaring guitar lines zoom throughout the album while high strung, complex drumming propels the engine. Gothic effects, such as church bells and morose keyboards, are weaved through pretty much every piece.

But, where the album elevates itself from its contemporaries is just how much of a ball it is. â€œBring Us Moreâ€ opens with a b-movie haunted house keyboard solo before exploding into a new-wavey dance jam. The whole time, the band rants against â€œmoderationâ€ itself. (Amusingly, the song is the follow up to â€œweâ€™ve had enough.â€) That is to say, the band is saying more is better, and with the pulsating beat, the triple layered vocals, the umpteeth layered guitars, the ghostly choral singers, theyâ€™re right.

Notably, tracks like â€œWe need a gimmickâ€ help. The song serves to let us know that this band isnâ€™t some ultra-serious corpse paint band wallowing in pathos. But, that being said, as the band runs through a rant of angles they could use (while ignoring the obvious) itâ€™s clear that while there is a great deal of whimsy here, itâ€™s not just a joke. These tunes break pretty much all of the modern heavy metal rules of self seriousness (dig the funk wah-wah,) but there is a great deal of craft at work. Frankly, you couldnâ€™t make songs as wild and wacky as this without a great deal of serious effort.

Of course, the party god, Andrew WK shows up on â€œLetâ€™s Get Fuckedâ€ and, while there is a salute to majesty of partying, the band pauses mortality before, of course, yelling â€œletâ€™s get a party going.â€ This album is a party. Itâ€™s crazy. Itâ€™s weird. Itâ€™s silly. Itâ€™s unique. Itâ€™s a blast.