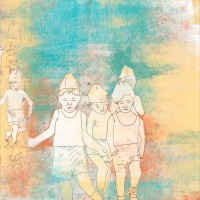 The first time I heard Come On Wandering I immediately liked it as it sounds like a bunch of bands I enjoy listening to all mixed together. My Bloody Valentine, The National, Averkiou, Caspian, and even a bit of Arcade Fire are present in Kite Party's sound. That might sound like the band is ripping on others' styles, but they aren't. Kite Party uses their influences to create a record that is a fresh and compelling listen throughout.

If there is one thing that is consistent throughout Come On Wandering, it's the production. When I saw them play, Kite Party had three guitar players (one occasionally played keys) with a bunch of reverb and delay pedals. As such, Come On Wandering comes off more of an atmospheric record that rocks rather than a rock record that is atmospheric. It's a perfect record to chill out to, but the heaviness of the band doesn't really shine through unless you are blasting it at high volume. Opener "Bell" is a perfect case in point- the song starts off with twinkly guitars and moves along at a comfortable pace until a drum break, then the band kicks on their fuzz pedals and the beat picks up real loud before fading to a single 'verbed out guitar outro.

Beyond that, song structures, vocal styles, and sounds vary throughout the album. "Pool of Love" completely nails the washy, distorted MBV guitar tone before switching back to a more straight forward verse. "Summery Dream" has a mix of hazy vocals and twangy guitars. "Sterile Everybody" is one of the most forward songs with a cool groove that reminds me of Arcade Fire in their early days.

Vocals and lyrics are a strange point for Come On Wandering. I think that a band can either be amazing for their lyrics, or they can be great for their sound. Kite Party fall into the latter category- you need to take them for a wall of sound rather than a storyteller with a band behind him. After repeated listens I can distinguish some of the lyrics, but mostly they are covered under reverb and distortion. The content is often abstract and that's fine by me as it all sounds amazing.

I wish that I paid more attention to Kite Party when they were playing shows- at least they ended their band on a pretty damn good note with Come On Wandering.