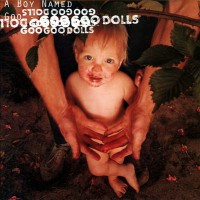 A Boy Named Goo is classic. And a record I'll fight to the death for.

There's always a lot of shit tossed around when I hear folks arguing about the punk roots of Goo Goo Dolls. Even more so, when they try to dissect the point of inflection where the trio went full-blown to the poppier side of things; or as I call it - alternative rock. Those debates were meaningless to me and will always be. I've often met this conversation with 'Seriously? Of all the bands whose punk roots you wanna argue...it's Goo?'. And I'll continue to do so because whether it was Johnny Rzeznik in his brash, energetic days...or an older, settled and pining songwriter whispering lullabies, their music will always be a guilty pleasure of mine. In fact, it's something I'd admit to any day of the week, so in this confession, they're not really a guilty pleasure but more of a novelty item that I gaze upon every now and then.

Rzeznik's lyricism started to shift to something more cynical and ideally, realer. He seemed more bent on world commentary in this album as opposed to others where despite his openness, he felt restrained to writing about his personal experiences and not as much in terms of worldview. On topics where he stood subtly poking and prodding before, he was much more forward-speaking now. Of course, he'd shape the majority of his thoughts around the concept of life, love and loss (and we all know how much family and relationships mean to him) but on songs like "Long Way Down", Rzeznik demonstrated that the band was ready to take on the world with a more wholesome POV. Granted, it was all fine-tuned to be radio-friendly but in the '90s, if you said you didn't want to be mainstream, your band was fucking lying.

These songs never hid that fact but they felt organic and Rzeznik and co. stood out as musicians who were destined for the limelight without forcing or trying too hard. It felt natural and A Boy Named Goo instantly came off as the stepping stone fans clamoured and as another integral part of the band's storytelling. You could say that this was coming for a while when you retrace what came prior. What I loved was that this album didn't really shuck and jive or reinvent their sound but helped hone their influences and balance adjustments here and there. They absorbed and crafted and finally came to an accessibility point. One which wasn't anything of a drastic game-changer in their catalogue but which is still recognized to this very day as a flashpoint that needs to be noted. It definitely does what it intended to do in helping them transition from a remote distance to somewhere nearer to the limelight.

Of course, old influences are kept on jams like "Naked" which still managed to point a finger in the future direction of Goo Goo Dolls, surely indicative of what 1998's Dizzy Up The Girl would sound like. With 1995 torn between bands battling to see who'd scale the rock pyramid and fly their respective flag high, the barrage of grunge, punk and alternative all made for fun times. It was the era where radio and TV airplay could still see a band keep semblances of their former selves while mixing the risky new frontiers in and that's what Goo Goo Dolls felt like on this record. "Name" to this date still remains the best original acoustic I've ever heard and I'll always admire how much Rzeznik didn't care what people thought of his music. As long as you wanted heartfelt lovers' jams, then this was a point to be engaged, to converse and to cry. It continued a pattern of solitude amid romance which Rzeznik's always played on and well, well not? After all, it makes sense to stick to your strengths right?

That's what A Boy Named Goo is. A band sticking to their strengths and doing all the things they do best. It's a toss-up between this and their 1998 record for me as to their best work but what'll always hold true is that both feel like one of the most complete musical chapters I've ever heard, simply split into two -- lingering three years apart. 1998 bookends for me the greatest era of Goo but what transpired three years before definitely feels like the catalyst for these friends resonating so much and forming what would become timeless...and a personal treasure. At least I have Beach Slang to cure these feels, right?