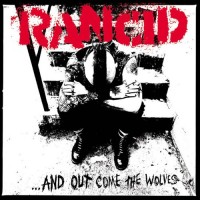 â€¦And Out Come The Wolves. Itâ€™s arguably one of the most important albums of the â€˜90s and one of the most influential albums on contemporary punk rock, not to mention one of the albums that put Rancid and Epitaphs Records on the map.

For some, Letâ€™s Go was Rancidâ€™s best record, but I would think that most Rancid fans would say it was â€¦And Out Come The Wolves. A lot of their best songs were on this album. Itâ€™s like they didnâ€™t need a â€œbest ofâ€ because so many great songs were on this one. And to some extent, I think Tim Armstrong and the gang knew that because a solid majority of their modern set lists consist of many songs from this album and they occasionally perform it in its entirety for special shows like Punk Rock Bowling.

So what are all these amazing songs that this album was comprised of? Well, I think itâ€™s fair to say that the first track, â€œMaxwell Murder,â€ though it was an awesome, short, and a very to-the point punk song, it was really all about that amazing bass solo which got Matt Freeman to be considered to be one of the best punk bassists ever. There was also â€œRuby Soho,â€ â€œ11th Hour,â€ â€œOld Friend,â€ â€œAvenues and Alleyways,â€ â€œLock Step and Gone,â€ and the mega-anthemic â€œRoots Radicals,â€ where Lars absolutely kills it on guitar, but especially on vocals. It was probably the best vocal work he has ever done.

Rancid did manage to shake things up a bit on this album. Not all of the tracks were just fast-paced, power chord-driven songs. They of course went in a ska direction for a few songs like â€œTime Bombâ€ and â€œOld Friend,â€ which was really no surprise because of Tim Armstrongâ€™s and Matt Freemanâ€™s involvement in their prior ska-based band, Operation Ivy. The use of organ not only complimented the songs well and added quite a more character to them, but it also showed that the band was not afraid of straying away from the â€œusualâ€ punk sound when recording this album.

Something else that was pretty remarkable about some of the songs on â€¦And Out Come The Wolves was Rancidâ€™s ability to tell simple stories about their lives in their lyrics, but then write them with such imagery that you could visualize the what they are singing with ease. Tracks like â€œOlympia, WAâ€ and â€œJourney to the Center of the East Bayâ€ told some amazing stories about the band membersâ€™ youth. â€œSheâ€™s Automaticâ€ went in a more sexual route, but nonetheless it did show a somewhat more vulnerable side of Rancid lyrics we donâ€™t hear too often.

From a purely aesthetic stand point, this was one of the most recognizable and most well done punk album covers ever. The image on the cover perfectly conveyed what this record was all about. It definitely conveyed to the average music consumer that this was in no way your typical pop, bubble gum record. If you liked it great, if you did't well then â€œFuck you!â€ Fun fact: the image was actually tribute to the cover of Minor Threatâ€™s debut self-titled EP. Clearly, Rancid had a lot of respect for the bands that came before and influenced them.

â€¦And Out Come The Wolves was a monumental punk rock release. Perhaps even legendary. For those non-punk rock musicians who claim that â€œpunk musicians canâ€™t play their instruments,â€ this album alone defied any notion of the sort. Tim, Lars, Matt, and Brett were clearly masters of their instruments during the recording of this album and still are to this day. Itâ€™s not only that every track on this album was great, which alone makes it a perfect (or damn-well near perfect), but this albumâ€™s influence and Rancidâ€™s influence in general will be felt for many future generations of punk rockers.