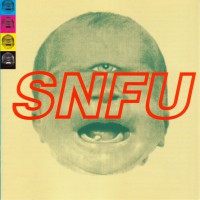 "Birds eat worms/Pigs eat turd/If I say a discouraging word/Slash my face with a rusty rake". This bit of prose was the beginning of "Rusty Rake," the opening track on The One Voted Most Likely To Succeed. Such were the brilliant and strangely poetic lyrics of singer, founder and sole constant SNFU member Ken Chinn, AKA Mr. Chi Pig. His troubles have been well documented in recent years. He has struggled with addiction, mental illness and even homelessness. All of that doesn't detract from the fact that he was one of the all-time-great punk rock frontmen. Although Mr. Chi Pig was best appreciated in a live setting, he was in fine form on this LP.

SNFU was originally formed in Edmonton in 1981. The music was somewhere between punk and hardcore, with funny or at least clever lyrics. The band released three highly influential albums (And No One Else Wanted To Play, If You Swear You'll Catch No Fish, Better Than A Stick In The Eye) before splitting up in 1989. SNFU reformed a couple of years later, and this version of the band found its greatest success. The One Voted Most Likely To Succeed was the second of three albums for Epitaph Records, sandwiched between Something Green And Leafy This Way Comes and FYULABA. The band went for a more modern sound and production during this era, adding elements of the skate punk that ruled that decade. They actually adopted some of the style of the bands that they had previously influenced or even inspired.

The cover of this album was the first thing that struck you. You didn't soon forget a picture of a Cyclops baby, even with its pre-Photoshop crudity. The record opened with the strong one-two punch of the previously mentioned "Rusty Rake" and "A Better Place." The latter was a catchy and powerful song about death. "Ashtray balanced on my chest/Sucking on a cigarette/If I don't burn in hell/I might just burn in bed" were the first lines of "Big Thumbs," a weird song about finding a thumb in a snowbank. There was no shortage of wild and wonderful songs on this LP. "Manuel," "My Mold Collection," "Mutated Dog," "Bizarre Novelties" and "Lovely Little Frankenstein" were all lyrically strange, but still kicked out the jams.

The words often initially seemed like nonsense, but repeated listens proved them well thought out. "Drunk On A Bike" was probably based on experience for Mr. Chi Pig. "The King Of Skin" was a tribute to Hustler publisher Larry Flynt. The closing track was "One Last Loveshove," a song about misguided devotion. "I threw myself off a bridge/Toss myself off the highest cliff/Hang myself from the rafters above/Because I could not live without your love". The albums 13 tracks flew by, without a clunker in the bunch. Mr. Chi Pig's charisma was on full display.

The One Voted Most Likely To Succeed was not the most influential SNFU album. That distinction would go to one of the early BYO Records releases. Nor was it their best album, although that was a hot topic for debate. It was however, a very good album, and a classic by mid-'90s standards. It remains essential listening for fans of that era, and Canadian punk fans in general.