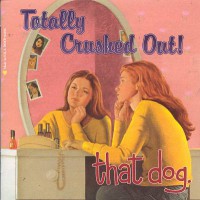 Released in 1995 and boosted by the radio domination of single â€œFriends of P,â€ Return of the Rentals found Weezer bassist Matt Sharp going in a cooler, synthier direction and establishing a music career outside of Rivers Cuomoâ€™s shadow.

Those cooed co-ed vocals sprinkled throughout Return of the Rentals are courteousy of sisters Petra and Rachel Haden, and they released another record of note that same year: Totally Crushed Out! by that dog. Fronted by sardonic frontwoman Anna Waronker, that dog hit many of the same heights as the Rentals. They wrote melodic alt rock that transcended a lot of the navel gazing sad sack grunge of the time.

that dog never quite gets enough cred in â€˜90s retrospectives, but their songwriting lives on in contemporary acts like Waxahatchee and Swearinâ€™. The band produced three records, all worth a listen. Their self-titled debut tended towards slow, dirgy tracks. It was not very commercial. Swan song Retreat From the Sun was packed with hooks. It was very commercial. Totally Crushed Out! lives between these two extremes, to the point that you could divide the record into two opposites.

Any of the songs on the albumâ€™s first half could have been released as singles. â€œMs. Wrongâ€ and â€œSilentlyâ€ are catchy yet heavy. But itâ€™s actual single â€œHeâ€™s Kissing Christianâ€ that hits hardest. I kind of love that a major label released a queercore anthem that takes aim at Christian orthodoxy as a commercial single. My favorite lyric is the double-meaning â€œHeâ€™s kissing Christian and heâ€™s taking it like a beating.â€ Acoustic strummer â€œAnymoreâ€ serves as a palate-cleanser.

The recordâ€™s second half returns to the more dissonant vibe of the bandâ€™s early work. â€œLip Glossâ€ plays like a punk tune. Petra drops a cacophany of viola lines on â€œMichael Jordan.â€ The nearly eight-minute â€œRock Starâ€ closes out the record in epic, spastic fashion.

Totally Crushed Out! may not be the most cohesive effort in that dogâ€™s canon, but itâ€™s oddly their most consistant record in terms of quality. You get the pop stuff up front, the big scary noises at the end, and somehow you come out feeling rather darn blissful. Kind of like a new crush.

NOFX: I Heard They Suck Live!!