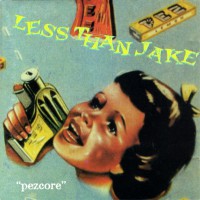 When I see â€œTwenty Year Anniversary ofâ€¦â€ an album, film or event, Iâ€™m always shocked. Twenty years? Itâ€™s really been that long? Iâ€™m not yet out of my twenties, so my brain can barely manage the idea of twenty consecutive years by itself. But when I saw that Pezcore was turning twenty, it seemed entirely accurate. I thought, â€œYeah, that seems about right.â€ Again, my youth probably plays a factor, but for as long as I can remember, Pezcore had existed and had been a revered early masterpiece in the folklore of third-wave ska.

Itâ€™s important to remember the context of Pezcore. Less Than Jake played ska-fueled punk right before it hit mainstream popularity (this album came out two years before the radio smash hits â€œThe Impression That I Getâ€ and â€œSelloutâ€), but at a time when they werenâ€™t the only ones doing it with success. Pezcore was released the exact same day as Rancidâ€™s â€¦And Out Come The Wolves. But Rancid, like Operation Ivy before it, played a grittier version of punk than Less Than Jakeâ€™s take, and Rancidâ€™s few forays into ska territory were closer to The Clash than the ska-punk wave of the 90s. Reel Big Fishâ€™s Everything Sucks came out in 1995 as well. But Everything Sucks played to the adolescent band geeks with a sense of humor and was clearly gunning for radio accessibility. Pezcore was for burnouts, drunks and stoners. Less Than Jake was goofy and didnâ€™t take itself too seriously, but their music was much more grounded in a reality that was relatable to directionless kids around the world.

The Pezcore sound was a combination of the third-wave ska that was manifesting itself throughout the country and the â€œEpifatâ€ pop-punk/ skate-punk style that was doing the same. For every fast-paced clean guitar upstroke, there were fast and distorted three-chord progressions. Vinny Fiorelloâ€™s drumming has always been simple: a kick-snare, kick-snare style that's been used on nearly all of Less Than Jakeâ€™s songs. It was simple, but it created a sense of urgency and cohesiveness to the songs. The one-two vocal punch of Chris DeMakes and Roger Lima created a sense of unity between the songs as well. Youâ€™d find both of them on every track, either leading, or standing down for the other while providing an emotive â€œwhoaâ€ or two in the background. Both had voices perfect for the Epifat generation: melodic and strong, but with enough grittiness to keep things from getting too poppy.

The lyrics, primarily written by Fiorello, would consider themes that would be present on every album that followed: being a kid with a lack of purpose or direction, drinking alcoholically, and small-town life with friends. â€œMy Own Flagâ€ and â€œBigâ€ were songs about youthful disorientation; they were for lost kids who werenâ€™t on the path to success. â€œWhere the Hell Is Mike Sincovich?â€ is a true story about a friend that left town and was never seen again-- an idea that would stick to the band through Hello Rockview. They didn't often have the answers, but escaping town seemed to always be the goal in a Less Than Jake song. It was the kind of idea that was highly relatable for youngsters like me. â€œThree Quarts Drunkâ€ was an alcoholic anthem, finding a sense of connection between the young narrator and the old drunk at the end of the street. Soon enough, Fiorello would become the old drunk in the songs, and the lyrics would turn more desperate and sad (look no further than "Malt Liquor Tastes Better When You've Got Problems"). Yet all of these heavy themes were sung in earworm melodies over fast, fun ska-punk, so they remained relatable and poignant, but never weighed down the listener too much.

Pezcore contained future live set staples and songs that would be rerecorded for later, more polished releases. For years, â€œJohnny Quest Thinks Weâ€™re Selloutsâ€ was nearly at the level of â€œThe Science of Selling Yourself Shortâ€ or â€œSheâ€™s Gonna Break Soonâ€ as â€˜that one Less Than Jake song everyone knowsâ€™. Thereâ€™s the classic â€œJen Doesnâ€™t Like Me Anymoreâ€ and â€œMy Very Own Flagâ€, both songs that continue to find spots on the ever-changing LTJ live setlist. Losing Streak (1996) and Hello Rockview (1998) would attract bigger audiences for the band, and for a stretch in the early 2000s, Less Than Jake reigned co-kings of ska-punk alongside Reel Big Fish. Pezcore was the starting point for it all.

I didnâ€™t get exposed to Less Than Jake until 2000â€™s Borders and Boundaries. By then, they'd only lost a lot of the clean guitar upstrokes and gained a cleaner recording for a bigger audience. But throughout their existence, theyâ€™ve never really left that Pezcore sound. Sure, theyâ€™ll occasionally drop a stinker like â€œThe Rest of My Lifeâ€, but their music has always touched back to the ska-punk style that they were playing twenty years ago. During my teen years, Less Than Jake would make yearly stops in my town on cross-country tours and my friends and I would always eagerly buy tickets. Over the years, we lost some of our zeal for ska-punk, but Less Than Jake would continue to make their yearly stops in our town, release new music, and attract new fans. They released See the Light two years ago and it was the same energetic Less Than Jake, even after twenty years of heavy output. We continue to hear their influence in the bands that grew up on them. We hear it nowadays in up-and-comers Successâ€™ unabashed love for a Less Than Jake melody. We hear it in bands like We Are The Union, continuing to carry the ska-punk banner. We hear it in countless burnouts, drunks, and stoners that make music just like this today: serious songs played in a fast, fun way.

The Meatmen: Pope On A Rope