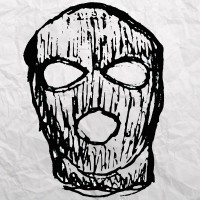 Shitty Friendsâ€™ follow up to their demo tape finds the band polishing, sharpening, and generally tightening their trade. On Crime Line, the band still makes their truck in early West Coast influenced punk rock. â€œI Donâ€™t Care,â€ (which is probably a Black Flag homage but isnâ€™t a cover) is a minute long snapper built of a storming riff while the band howls and spits in a slightly manic, totally pissed off style.

Quite cleverly, the band is smart enough to play with the formula. While the opening two tracks blast by in as many minutes, â€œLast Callâ€ seems to be where the band defines themselves. A slower, heavier, more ragged tune, it undulates between early hardcore before it breaks down into a sound freakout, more reminiscent of the early post-hardcore rumblers, like the Cows, Tar, and Jesus Lizard. Itâ€™s a wise choice that allows the band to play up their influences, but also to drift away from them. Essentially, it shows that the band has raw firepower, but isnâ€™t scared to get a little arty with it. This is exactly the kind of thing that separates good punk bands from great punk bands.

Throughout the short release, the band plays with expectations. Sometimes they embrace early punk structure to the point where the songs themselves are homages. But sometimes, they set up what seems like a salute to early SST, only to completely flip the scrip and sprint off in another direction. Shitty Friends are playing it fast, loose, and smart. Thereâ€™s a lot more to this release than four short punk bangers- though the tunes are punk bangers. This is music from the gut, tempered by a tactical mind. Will they be able to spread this over a 12-inch and make a full length that is as interesting and as fiery as their EP? My bet is on yes.