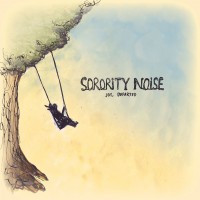 Sorority Noise started out with a great run last year. They rerecorded demos from old releases as well as new songs to create their debut, Forgettable. The album resonated and put the band on the map. After a lineup change and some time, Sorority Noiseâ€™s second album, Joy, Departed is an indie/'90s/alt-rock/grunge roller coaster that is bipolar at times. The albumâ€™s themes clearly lay the foundation as vocalist Cameron Boucher spills his guts about despair, breakups, depression and relapse. Boucher is known to wear his heart on his sleeve, but on Joy, Departed we get a deeper birdâ€™s eye view into the emotions in his head.

The albumâ€™s overall feel is melancholy and for the most part, quiet. Soft symphonic guitar or drawn out drums creates the atmosphere to Boucherâ€™s despairing lyrics. The first half of the record goes through the songs that start out quiet and eventually build up into the poppier songs the band is known for. It seems like the band combined the elements of their softer, more acoustic songs and meshed them with the poppy side of the band to create songs that almost perfects the bandâ€™s sound.

Itâ€™s not until â€œYour Soft Bloodâ€ that the album takes a turn for the eerie. In a Nirvana-esque way, the bandâ€™s super light shimmering guitars switch to overdrive in quite possibly the bandâ€™s heaviest song to date. Half of the five-minute song is an eerie grunge roller coaster that perfectly marks the shift in the records energy and focus. This song will definitely live as a closer for the bandâ€™s live set for sure.

There are a handful of songs that really do spill Boucherâ€™s guts. On top of his fantastically structured songwriting, his lyrics are poetry spilled to a melody. Whether heâ€™s confessing his relapse in â€œUsingâ€ or wanting to be the smallest amount of enough on â€œCorrigan.â€ Every song has heavily detailed subject matter that deserves a few listens. Some of these lines on this album are bound to top notorious lyrics from Forgettable.

Another interesting aspect of the album is how much classic rock shines through. This could be due to the entire band, but it seems lead guitarist Andy Ackerman (Scuff) bleeds his love for hair metal and classic rock influencing his solos on songs like â€œArt School Wannabe.â€ The classic influence fits each part of the songs well and isnâ€™t overused. Itâ€™s also become a staple for the band at more recent shows.

Sorority Noise is a great band because they are unlike anything in the genre right now; yet find a way to inlay themselves into the mold as a staple band for years to come. Joy, Departed has so many elements of music that the album is rounded out perfectly as it flows through each piece. If you like that balance between indie, emo and pop punk, this album will definitely hit you on a personal level in someway. If not, wait till the thrilling build up in â€œWhen I See You (Timberwolf)â€ where Boucher spills the final line, â€œIf hell is real, I hope youâ€™re enjoying your stay.â€ What a way to end!