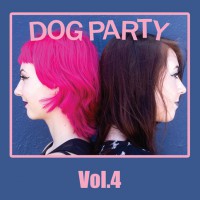 I became curious about Dog Party after seeing so much conflict over them at Punknews. I dug back into Dog Party's archive and actually found myself pleasantly surprised. Initially, I found Dog Party to be very elementary and average but they grew on me with each record. They're cheesy at times, surprisingly mature at others and then when the dust settles, they find themselves doing conventional pop-punk quite well. In fact, they're way beyond their years, keeping things simple, and honestly, given their age, I think they've done a great job in handling how things have gone career-wise for them.Vol. 4 is a statement that documents the entire journey, with sass, sarcasm and a couple subtle 'fuck-you's' thrown in without saying too much.

Whether it's their summer-breezy pop-driven "Peanut Butter Dream" or the lyrically-strange "Dead Guy," you can't help but find something amusing about Dog Party's punk idiosyncrasies. And I don't mean that in a bad way. They've got a simple formula and on this record, I found it to rely more on their anger. Their energy appears to revolve more around the criticisms they've garnered. Given the harsh words they've gotten and the misogynistic comments flung at them, it looks like they're using this as fuel, channeling them into a bunch of middle-fingers and tongue-in-cheek remarks.

It feels much more fearless and I'm really digging it. They don't care what you think and why should they? They're enjoying the ride, blurring the lines between what haters want them to be and what they truly represent. I mean, let's be real, at that age, what the fuck were you doing with your life?. Even on the indie/power-pop "Song 362", lyrically you feel that they're much more serious about the order of things these days. Simple chords, catchy hooks and as I said before, lyrics that'll leave your head scratching -- only to realize that once upon a time, you felt the same way about life.

Tracks like "Sapphires" should further serve as an apt reminder that as catty as Dog Party gets, they seem well on their way to making a mark in the punk community. They're not changing the game up much or doing anything unique but as this album shows, they know how to assemble music with an intuitive flow - telling stories smartly while adding a personal flair to said tracks. They pack in a lot of substance as well and it's an integral musical move in keeping things relatable for those of us young at heart.

The Meatmen: Live in Lansing

Oso Oso: Real Stories Of True People, Who Kind Of Looked Like Monsters