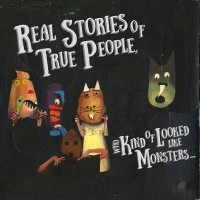 Real Stories Of True People, Who Kind Of Looked Like Monsters (2015)

Jade Lilitri's got quite a storied career in a relatively short space of time. From State Lines to osoosooso, it's always been about candid, catchy statements while doing his utmost not to become too stagnant or too stale in a pop-punk arena that seemed saturated and uninspiring at times. His music helped fill my Joyce Manor downtime and why not? It's vibrant and full of energy. In the past he's always had a lot to say and now, being more of a lone wolf than ever, it seems that as time has passed, he knows exactly what to say at exactly the right time. Real Stories Of True People, Who Kind Of Looked Like Monsters doesn't feel like the youthful exuberance encapsulated on 2013's For The Boats or last year's osoosooso but instead comes off older and wiser. That said, it's still a huge burst of anthemic fun.

Let's get one thing straight -- Oso Oso knows how to craft pop-punk records full of indie spunk, head-bobbing moments and singalong melodies. Lilitri continues his simple formula for making music as he brilliantly walks the tightrope of pop and punk and it's a balancing act he pulls off all too well. Songs like "Another Night" and "Wet Grass" help distinguish themselves quickly from acts of old under Lilitri's vocals which feel more subdued and less scratchy. He comes off more calculated and trying than ever but it works in his favor. Of course, all this caution is thrown to the wind when the tempo needs to upped and he cuts loose but I admit, these unrestrained moments crop up too few and far between. Instead, he dials things down and concentrates on simple, picky chord structures and his most intimate lyrics to date. Oso Oso is more about harmony and rhythm than the juvenile sprawls (which I absolutely adored) of the past couple years. Even with the slower "Where You've Been Hiding," Oso Oso feels more expansive and manage to tell bigger stories than what was established previously.

Lilitri consistently delivers and this album's another statement as to why you should be picking up anything he spearheads. He's got a fine knack for ragged, rough, demo-punk that buries itself so neatly in anthemic landscapes. Refer to the final three songs here which form a narrative that feels separate from the rest of the record. It nods to the older iterations of Lilitri's musical journey and the subtle transitions he's made inch by inch. "This Must Be My Exit" caps off his old theme of secretive pining, friendship and life under duress and it's the way in which he expounds on these notes that wow. It's always been one of his nicest features allowing fans to learn more about his more vulnerable nature; and as this despondent acoustic wraps, it sinks in that Lilitri has accomplished what he set out to. Add a record that's more self-assured, confident but still very much bubbly to your catalog.

By now, I can tell you after listening to so much music from him, Oso Oso is another chapter that shows his pop-punk genius. Real Stories Of True People, Who Kind Of Looked Like Monsters is definitely made for year-end lists and goes on to finish what State Lines set out to achieve under the likes of Hoffman Manor. It's even more interesting that now Lilitri feels like he's chiseling out a new voice that's ready to leave the past behind.

Modern Suspects: Told You So [EP]