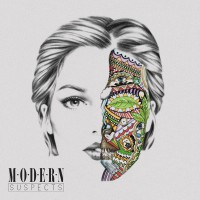 Modern Suspects list their genre as "popternative" on Facebook, and that's pretty fair. However any punkier or more eclectic influences that would make their five-song EP Told You So significantly better have been filtered out like water from a used towel. At best they're fine for what they are, a pop band with very, very slight funk and new wave influences, like the wah-wah funk and bass sound on "Light Ahead of Me." At worst, they're almost vomit-inducing with their cloying, nauseating vocals, backing harmonies and syrupy songwriting. It's in no way a good thing if a band reminds you of Jason Mraz.

Not coincidentally either the best song is the opener "Told You So" which sounds just enough like a lighter M83 or less DIY Twin Shadow to pass as a decent little dance chugger. The drum machine opening, piano fills and harmonies are all fairly charming and it's got a decent hook, but then the vocals enter. Honestly the lead singer is one of the biggest issues on this whole EP. He ranges from whiny to irritatingly inoffensive and sanitized, sounding either like a 14-year-old or the petty half-brother of Owl Eyes (remember him? That's why you won't want this EP). This makes the lyrics, which focus pretty heavily on betrayal and being spurned in relationships, even worse. He doesn't sound like a hurt lover, he sounds like a adenoidal teen, like on the hilariously maudlin "Hold Me," which seems to have been very, very specifically designed to have been played on an ABC Family teen series near the climax.

Truth be told I could see this band being something of a hit if the vocalist changed up his style just a little and they added electronic guitars (which would really give the songs some bite). They have some hooks and a little style, like a even less dangerous teenybopper Neon Trees. But they'll need to grow up, and very fast, and maybe they can get some festival slots and even kiss underage girls on stage (yes I've seen this happen, it's weird and creepy). And I for one won't be listening.

Oso Oso: Real Stories Of True People, Who Kind Of Looked Like Monsters