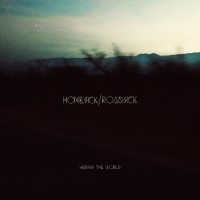 After reading about what other bands the members of Santa Barbara, Californiaâ€™s Versus The World are in, like Lagwagon, The Ataris, etc. I was pretty excited to jump into Homesick/Roadsick with a fresh set of ears, eager to listen to what a lot of places I read said about the bandâ€™s mixture of post-hardcore and pop-punk.

What I got though was an eleven-track album where every song seemed safe enough to be played on any generic rock radio station. Musically, you can definitely hear the punk rock influence, but the album is much more on the polished side compared to the grittier and edgier material we get from countless other bands. You can definitely hear the melodic post-hardcore sound in the vein of bands like Good Riddance and No Use For A Name in songs like the title track and "Seven Thirty-One." There is lots of distortion on the guitars that blare high-pitched octaves and power chords and hard-hitting drums that play behind the lead vocalistâ€™s highly melodic and carefully paced singing. Occasionally, Versus The World will even throw in a wailing guitar solo in a few of the songs. The one in â€œDetox. Retoxâ€ is something out of late â€˜80s rock or hair metal song. There are lots of bends and fast hammer-ons played through a wah pedal to give the solo some extra spice.

It really isnâ€™t so much the musicianship that is mediocre. It isnâ€™t. The musicians in Versus The World are indeed talented and it shows on Homesick/Roadsick. One of the main problems with this record is the lead vocalistâ€™s voice. Obviously, there are some who enjoy his style of singing, but when I was listening to this album, it just irked me to the point where I couldnâ€™t focus on anything else on the album. His singing style to me comes off as so overly dramatic. He can absolutely sing on key and hit really high notes, there is no disputing that. But the way his singing is executed was so distracting. Even Dave Hause, who does guest vocals in the first song, â€œThe Santa Margarita,â€ is not able to redeem it. To add more fuel to the fire, at times the lyrics can be kind of clichÃ© and corny like â€œI regret every precious moment I squandered away/ But in the end you were everythingâ€ in the song â€œBlack Ocean.â€œ

When it comes to Homesick/Roadsick the real question is where is the edge? There doesnâ€™t really seem to be one. Itâ€™s not a very challenging album. The instrumentation is cool at times, but the vocals come off as whiny and that in turn is what really takes away from this record, which is unfortunate because the band members use their talents so well in their other projects.