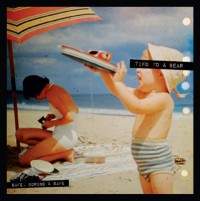 Tied to a Bear

Every time Red Scare releases something, I'm usually pretty certain that I'm gonna dig it. The label's got a good ear for that standard pop-fused punk rock that I just can't get enough of. Safe, Boring & Safe is not on Red Scare, but it sounds like it might as well be. It's got the same simplistic appeal and anthemic melodies of countless Red Scare releases.

Boston-based Tied to a Bear (nice Simpsons reference!) play straightforward pop punk in the same vein as the Copyrights. Safe, Boring & Safe, available on Bandcamp, has thirteen wonderfully unassuming power chord anthems in verse-chorus-verse-chorus structure. The choruses are instantly catchy and the tempos are upbeat. Thereâ€™s nothing truly special about these songs, but this sort of feel-good pop punk is endlessly playable.

It's not a concept album by any means, but a certain overarching theme on this album is life as a fuck-up. The usual themes--- drinking, tattoos, relationships--- are all covered aplenty, and itâ€™s certainly relatable content for every twenty-something man-child. Lyrically, the band tends to go straight for the generic, but occasionally will dig a little deeper and explore more interesting territory to better address the themes. On â€œFucking Upâ€, a standout track, the closing lyrics are â€œIâ€™m just a child in a grown manâ€™s body/ Feed me and clothe me and give me your money/ Every dollar Iâ€™ve spent is on tattoos and not rent/ I still wonâ€™t learn my lessonâ€. That one hits a little too close to home.

After an album of catchy sing-alongs, the band uses the last track, â€œPlungeâ€, to get into weirder territory. Itâ€™s a heavy, alternative-rock banger that feels refreshing, if out of place. Itâ€™s a unique track for a pretty standard pop-punk album, but I canâ€™t help but wonder if it wonâ€™t go over well with the band's intended audience. Either way, itâ€™s nice to see the a group take a reprieve from standard fare and challenge themselves a little more.

Safe, Boring & Safe might be a safe pop-punk record, but itâ€™s far from boring. Like the Copyrights, Tied to a Bear know how to take simple power chords and obvious melodies into an engaging and memorable album. Head over to the Tied to a Bear Bandcamp page to stream a track or buy the album.

Flesh Wounds: In the Mouth [EP]