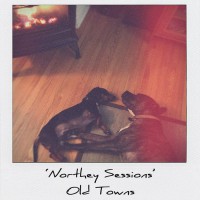 The Folk-Punk scene seems to always bring about the best in punk songwriting along with many heavy hitters drawing influence from that particular genre including Against Me!, Frank Turner, The Front Bottoms and even The Gaslight Anthem from their earlier days.

Some bands who are normally heavy and electric tone it down and go on acoustic tours to support their personal material; Joey Cape of Lagwagon and Ian Graham of Cheap Girls are prime examples of this. In other cases artists have even had full fledged solo careers built on it such as working class hero Billy Bragg and Chuck Ragan himself.

Such is the case with Robbie Shirriff a.k.a Old Towns - a folk-punk singer songwriter from the city of Edmonton, Alberta.

Releasing a 4 track E.P filled with hopeful lyrics, captivating melodies and heartfelt moods (yes I did just write that!).
For a debut independent release by this artist it has great potential in the songwriting and overall production of the album, I guess the music does kind of make sense where it's from - Alberta, pretty much the Texas of Canada.

"Freight Train Blues" starts with a light strumming pattern and a backing guitars for good measure. Vocals come in to seal the deal and take over, taking you to some plains in Alberta for the next 3 minutes and finishing on the line 'I'll be on my way...'.

"Better Years" start off in a similar fashion but overall is a slower song. It's the slowest song on the E.P actually but it's quaint and perfect for those summer evenings when you're finally relaxing and want to let out some steam from the day.

"Strathcona" reminds me more of something I'd hear from an Andrew Jackson Jihad song, especially with that banjo that really puts it out there. A jumpy, happy song - halfway through it the song changes tempo for a bit to a slower beat but returns to it's original pace and finishes with it's cheery chorus.

Last but not least we have Swear Like a Sailor. Longest track of the E.P by only a few seconds, the lyrics portray a sorrowful experience with lines like "I know it's getting late, I'm finding it hard to concentrate" but nevertheless it's a perfect ending to Old Towns' E.P here, like the last chapter of a good book.

Songwriting like this has definite potential and I wonder how it would sound with a backing band. Or maybe Old Towns doesn't need a backing band? Either way, there's some good stuff here well worth the listen.

Citizen: Everybody Is Going To Heaven