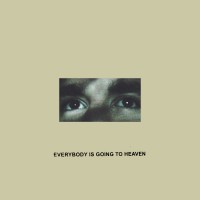 Citizen's Youth was one of those alternative/grunge revivalist records from 2013 and a record that I enjoyed quite a bit (admittedly in the minority). It stacked up with label-mates such as Basement and Superheaven (known as Daylight back then) and it was a pretty decent combo. They all had solid records out that year which helped distinguish their respective sounds more than any other release in my opinion. But what makes this Run For Cover trifecta that much more interesting this time around is that they've all shifted their sound over the past couple years with differing results. Basement didn't deviate as much as the others but still felt a few steps away from the norm. Switching gears to Citizen and Superheaven where one thing stands out - that's producer Will Yip. Is it a thing now where bands who want to shift their sound dramatically head to him? Everybody Is Going To Heaven is bold and very ambitious, to say the least, but it's a collective where Citizen manage to scrape by rather than kick your teeth in. A lot of risks and experiments taken feel unnecessary. It's not the best addition to their catalog and ultimately, these tracks pan out as more tunes that are saturating the market with a certain emo/shoegaze/dead-tone vibe that'll get played out pretty quickly.

These bands need to stop mirroring each other with such a vacant sound. I'm also referring to Title Fight, who more or less cemented their transition with this year's Hyperview - a project that caps what Yip's been overseeing for quite some time with them over a few records. In short, it fell flat. Superheaven's Jar a couple years ago was very damn solid but Ours Is Chrome was another Yip-produced record that lacked energy and life this year. Now, Yip isn't all about misses because Pianos Become The Teeth embarked on a drastic shift from the screamo/post-hardcore arena under Yip into more calm, melodic territory on Keep You last year. And it was fucking beautiful. Just like the majority of his work. I'm a huge fan in case you thought otherwise but his new work isn't resonating with me that much. Again, I'll admit that no matter what, you can't dispel the quality in technical showmanship and production offered by Yip's engineering.

But before you think I'm rambling and raving, I just wanted to inform and put into context these notes because again, Citizen barely escape from falling down the same rabbit-hole as Title Fight and Superheaven. That's the hole saturated by brooding, melancholic notes that fail to inspire a sense of art or creativity. A lot of Everybody Is Going To Heaven feels like it's raw, abstract and imaginative but at the same time, you feel like you've heard a lot of these songs already this year, which ironically come from music produced/recorded by Yip.

The downtrodden cloud hovering over this new album is something the band fearlessly touted and in doing so, they made it clear that they'd expect some backlash. They also made it clear they wanted to venture into new pastures a la the heavier and less anthemic tracks like "Stain" and "Cement" - which sound like stuff from Nothing. Honestly, these are all good. No issue here. But again, it isn't new or innovative with so many bands doing the same exact sound. You don't want to get boring and you do want to step outside your comfort zone but still, it should feel a bit more calculated, not trial and error like this record. I don't mind dropping the pop-punk aspects, the meandering emo and overall radio-friendly accessibility of say, "In On It" from 2013, but despite the intimate songwriting, Citizen feel like they've lost their edge. Just like Title Fight, Citizen have worked with Yip for years and I guess it's this trust that allowed a gradual shift so that kind of friendship/bond must count for something. Mat Kerekes' vocals take a departure from his direct approach of old and is another reason I don't feel as connected to or engaged by their music. He sounds like he's just going through the motions. Tame, even.

Things come off one-dimensional and are a lot to take in if you're a, loyalist like me. I'll give it a couple more spins but right now, it honestly doesn't even feel like a grower. "Weave Me (Into Yr Sin)â€ is a slow-burner that you'd usually expect them to pull off but it lacks the energy and vibrancy of exposed, stripped down oldies such as "The Night I Drove Alone". Even the mid-tempo jams such as "Heaviside" and "Yellow Love" lack impact and that's where things really crumble. Citizen always jumped out at me. This album, however, struggles to hit the mark and doesn't feel like leaving anything close to a lasting impression. Words like 'average' and 'forgettable' are what I'm torn with at the moment. If I sound harsh, it's because I'm a huge fan of all these bands and while I applaud them switching things up, just stop making music that'll put me to sleep. I love emo but this is a different kind of depressing. The tracks that hit really save this album but those that miss, really leave a bad taste. Still, Citizen does just enough to get the benefit of the doubt.