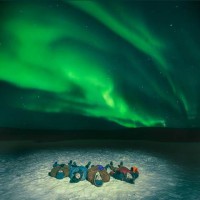 I'm always a bit wary when The Front Bottoms release something new. Their self-titled is essentially perfect, and showcases the band at their best. Luckily, the follow-up, Talon of the Hawk, was pretty wonderful, too. Since then, though, the band's popularity has been growing at an astronomical rate. They've gone from being that small quirky band who supported The Menzingers at the Hare and Hounds that one time to one of the biggest bands in the entire alt scene.

The thing about The Front Bottoms is that typical "Front Bottoms charm" they have. I'm not sure how to define it. I think it's Brian Sella's unique vocals or maybe it's the frantic drumming. It could be the extra instrumentation. Or the lyrics. Or the often odd song structures. It's most likely the combination. So with each release, the main question is: Is it still there?

Now, after announcing they've signed to Fueled by Ramen, that question is the thing people are gonna fret about. Do they have creative control? Does it still sound like The Front Bottoms?

Well. As for "West Virginia" which was released first, the answer is a pretty firm... "Maybe?" Sella drops the trusty acoustic for an electric guitar for one of the first times. The drum beat is that of "We Will Rock You" by Queen. But, it just works. It sounds Front Bottoms-y, but it sounds different and new. Not enough to alienate new fans, but it's not particularly mind blowing enough to beat a track like "Flashlight" or "Twin Size Mattress" as that number one track.

Then came "Cough it Out". That totally blew me away. It's a bit slower, a bit weird, but it's totally nostalgic. It sounds like it could fit in somewhere on the self-titled, yet also distinctly new. The snare beat and the minor keyboard keys drive the song forward. The chorus is incredibly subtle and catchy, but the bridge in the middle when Sella sings "I like the in-betweens, I like the time it takes to get somewhere," comes from absolutely nowhere yet adds an entirely new layer to the track. It's an amazing four-and-a-half minute song which will no doubt be stuck in your head for hours on end.

This double a-side is totally different, but that also makes it totally The Front Bottoms. They're always doing something a bit different and it's nice to have such a distinctly different band around right now. Not another one of those bands from the "emo-revival" scene just going the shoegaze route. They're basically just doing whatever they want, and it's great.

Young and Heartless: The Pull of Gravity [Reissue]