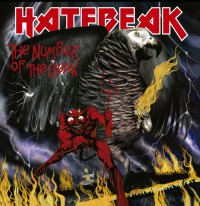 There's no elegant way to say this, so I'm just going to put it out there: Hatebeak is fronted by a parrot. An African Grey Parrot to be exact. His name is Waldo, and he's joined in the band by members of Pig Destroyer and The Index. Hatebeak plays heavy metal in the traditional sense, with the squawks of a long-haired frontman replaced by those of a majestic avian. On Number of the Beak, the band delivers six new tracks along with a number of older tracks from now out-of-print releases.

While there's no question that Hatebeak is, at least on some level, a novelty act (did I mention the singer is a parrot?), that doesn't mean the record can be easily dismissed as a joke. There are some good things going on here musically, though if you're looking for squawk-along choruses, you might want to look elsewhere.

Putting aside the, uh, unique vocal approach, the music is very much rooted in the classic heavy metal of acts like Iron Maiden. In fact, the record's title and cover art are an obvious tribute to that band. There are plenty of chugging riffs of the menacing variety, along with whizz-bang solos and lots of double-pedal action. The players are clearly technically proficient, and there's a palpable sense of joy in the music, despite the dark imagery, that's likely borne from musicians paying such obvious homage to their influences. For fans of this style of heavy metal, there's a lot to enjoy.

Unsurprisingly, the album diverges from the rest of the metal pack when it comes to the vocals. As one might imagine, there's no lyrical content to unpack, at least not to human ears. A fellow parrot might say otherwise, but we couldn't find one to review this record. That said, Waldo's vocalizations do add something to the recording. When used correctly, the screeches and wails sound almost like screams. Paired with the pulsing metal soundtrack, the combination can make the listener somewhat uneasy, which may be the point.

Unless you're a huge metal fan or bird enthusiast, Number of the Beak is unlikely to merit repeated listening. However, it's certainly worth a spin or two, as the execution of this one-of-a-kind concept is well done in most spots, and definitely something you'll want to tell your friends about.