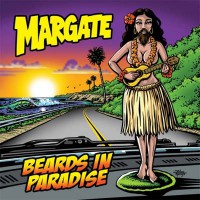 Melodic punk rockers, Margate have been paying their dues in the Los Angels punk scene for about 10 years now opening for notable as like Teenage Bottle Rocket and even Success recently. Now they have released their new full length Beard In Paradise on El Hefeâ€™s (of NOFX) LA-based record label Cyber Tracks. If you havenâ€™t seen this band perform or even heard of them just know that what makes their live show pretty unique is that their drummer is also their lead vocalist. So keep that fun fact in mind when giving this record a listen.

With ten tracks and coming in at just over twenty minutes, Beard In Paradise is filled with highly melodic vocals, fun lyrics, and energetic instrumentation. Drawing from their obvious influence from â€˜90s-era Epi-Fat bands, songs like â€œThe Unsilent Majority,â€ â€œWant It All,â€ â€œIâ€™m Your Densityâ€ (and others) are filled with sharp guitar riffs, slamminâ€™ and in your face drums, and three-part vocal harmonies.

Specifically, the song â€œThe Unsilent Majorityâ€ has an uplifting, descending guitar riff and a fairly standard power chord progression. When it comes to the vocals, the singer has no problem when it comes to his vocal range. He sings the melodies very well. But where is the aggression in this album? It seems pretty absent through out the album.

At times the lyrics on this record seem kind tired and clichÃ©. It wouldnâ€™t be hard to find another pop punk band that has written fairly similar lyrics about the topics Margate touches upon here. The lyrics that especially come off as clichÃ© are from the song â€œRock Out With Your Clock Outâ€ that has lines such as â€œItâ€™s an hour and a half to freedom/ Been staring at the clock since three/ It was three hours to freedom back then, so what if thereâ€™s a commute for me.â€

Not all of the songs on Beard In Paradise are straight pop punk anthems. The last track â€œNever Knownâ€ is a slow acoustic jam. Right in the middle though, the band changes things up a bit with the title track. With this song Margate goes into a mellow ska/reggae direction. They stick with the highly melodic vocals and three part harmonies, but the bass is a lot more prevalent than it is in the other songs and the guitar has a clean and high-treble sound to it. And lyrics like â€œPop a cold one/ Feeling the sun/ Letâ€™s sing along/ All roll as one/ No problem here today/Just like Randy would sayâ€ definitely reflect the feel of the song nicely.

Is there really anything new here with this record? Not really. It seems like Margate played it pretty safe when writing this album. It doesnâ€™t really stand out that much from other the pop punk records. But nonetheless Beard In Paradise is a fun and laid-back record that doesnâ€™t seem to take itself too seriously.