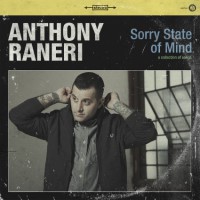 Love 'em or hate 'em, Anthony Raneri and Bayside have a knack for consistency. Since 2004â€™s Sirens and Condolences, Bayside have produced a solid, if pretty analogous discography. In 2012, Raneri went off on his own for his first solo release, New Cathedrals, which was a surprising departure for the singer-guitarist. While not as dark and heavy as Bayside material, the EP didnâ€™t stray too far from the format, pushing Raneriâ€™s songwriting through slightly folksier pop-rock numbers. That in mind, I wasnâ€™t anticipating anything too far removed from that (i.e., special or interesting) from this record. Thankfully (or unfortunately, depending on your point of view), Raneri didnâ€™t just throw out another album of Bayside b-sides. Aside from the brief opener, â€œSmithereensâ€ (essentially an acoustic Bayside waltz), he took some chances on Sorry State of Mind, some for good, some for naught.

Iâ€™ll start with the latter. â€œGoneâ€ begins like a standard Bayside track with Raneri lamenting, â€œIt seems like best moments in life foreshadow the worst, most every timeâ€ over acoustic chord-picking. The typical intro gives way to electric drums and a synth-heavy chorus thatâ€™s more Hellogoodbye than Iâ€™d ever expect on a Raneri record. The songâ€™s even got autotune! Itâ€™s a high quality pop tune that would feel right at home on the radio, but one that seems out of place in the context of the songwriter. The following track, â€œNo Good,â€ is a similarly radio-ready somber piano ballad thatâ€™s essentially an â€œitâ€™s not you, itâ€™s meâ€ breakup song. On these tracks, Raneri has removed his dark imagery and cynical wordplay in favor of generic lost-love lyrics and pop song accessibility. Both are well written and extremely polished, but I canâ€™t help but wonder who the intended audience is for them -- itâ€™s certainly not Bayside fans.

Luckily, synth-pop and the piano ballad are not the only roads traveled on Sorry State of Mind. Raneri uses the albumâ€™s titular track to explore an ambling folk songwriter sound. With a moseying snare and bass beat leading the folk-country instrumentation (featuring some playful piano tinkling and even fucking saxophones!), the song is a pleasant surprise, reminiscent of â€œSandra Partialâ€ from his first solo release. Raneriâ€™s back in his lyrical zone, singing â€œYou were a bill I couldnâ€™t pay, a shirt I couldnâ€™t change/ You were forbidden fruit that I just had to taste.â€ He heads toward synthy-pop-rock a la Motion City Soundtrack on â€œI Never Want to Fix Myself Againâ€; the melodies, the self-reflection and the lead synthesizer over upbeat pop-punk all reek of Justin Pierre and company. Both tracks couldnâ€™t be more different, but theyâ€™re both interesting departures for the Bayside vocalist.

Raneriâ€™s voice has never sounded better. Of course, the fantastic production and layers of harmonies on most of the vocals doesnâ€™t hurt, but itâ€™s easy to see his marked improvement over the years. Writing strong melodies and big choruses are both strengths for Raneri, and they're certainly present on the record. He deserves loads of credit for making such a short album span so many different styles and approaches. While some donâ€™t work for me, I canâ€™t deny the strength of the songwriting and the willingness of an artist to explore entirely new areas. If youâ€™re looking for another Bayside record, go ahead and spin Cult again; you're not going to find that here. Sorry State of Mind is the singer-songwriter goes pop, folk, rock and acoustic album all rolled into one.