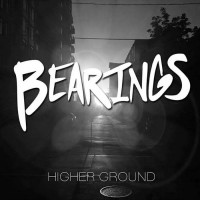 Releasing an E.P titled Higher Ground which features 5 tracks of soothing, dramatic tales of break up, coming of age and various other stuff you go through in your early to mid 20's. In essence, it's about growing up - and what better way to do so than with the track "Constant State"?

A jumpy start with a guitar riff which kind of sounds like something that you would expect to hear from a contemporary pop punk band. An accompanying backing band? Check. Palm muted chugging verse? Check. Clear cut, Treble-laden vocals? Check.
Lyrics tell of some story perhaps pertaining to a break up or a past disappointment with lines such as 'You watch me fight against the current but it's proven too hard' - a common and unfortunate staple in many experiences in life at this time, maybe a relationship, or school or maybe just work in general.
This is the perfect track to start off when you put the disc in your car and start your day.

"Secret Safe" is the perfect ballad to counter "Constant State" with it's slow tempo intro that eventually builds up to to it's faster-paced verse and chorus. The synopsis clearly stating about an unattainable love with lines such as 'She's got a boyfriend, she's got a boyfriend' and 'I'm not the same kid that I was in high school and I'm having a hard times figuring out the problems this will cause' - feelings for an old love or so as it seems and the high price you'd have to go in order to get it.
The ending a.k.a the loudest part of the whole song, a clear opposite of the intro and this is where you want to blare it on your speakers while zipping through the freeway. Back up vocals really help shape the ending to be the greatest it can be. Best part of the song.

A solid release from a solid band. What more else could I say that can't be said by the music?

There's some great potential here. Given enough time with the right label and right tours with some good bands both local and international these guys have a bright future in pop punk.