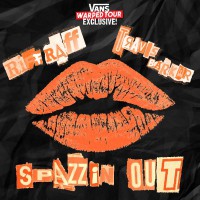 From starting off with ska-punk superheroes The Aquabats to the megastar potty-punk of Blink-182 to the hardcore punk-rap yelling by the Transplants, Travis Barker has always been up for drumming on a variety of projects with very different styles. This time Barker embarks on a summertime rap-rock jam with the MTV reality star turned rap collaborator extraordinaire known as Riff Raff. Is that the guy with the crazy cornrows, gold teeth and neon stretch pants that actor James Franco mimicked in the movie Spring Breakers? Yes, it is.

If you followed some of Barkerâ€™s musical endeavors to date, this collaboration might not be that surprising to you. A few years back, the drummer had popular rock remixes of a few rap originals by the likes of Soulja Boy and Flo Rida, as well as his 2011 solo album, Give The Drummer Some, that featured original collaborations with everyone from Lil Wayne to Slash to Steve Aoki. As for Riff Raff, this is his first venture into the punk world as his only album, Neon Icon, sticks to hip-hop.

â€œSpazz Outâ€ is described by Alternative Press as an â€œup-tempo party starterâ€ that is â€œpure fire.â€ The track starts off with a distorted, down-stroking guitar riff accompanied by a booming beat with what sounds like extra kick drum in the mix. Riff Raff breaks into moderately paced rap-singing laced in effects with the line of â€œThey used to sell me dreams, my dreams are in the back, I'm looking for my team but my team is in the backâ€¦ Spazzinâ€™ out, out, outâ€¦ Whoa, spazz out!â€ The occasional keyboard loop can be heard as well as a breakdown that toggles the trigger effect on the drum machine and a line about â€œDrinking Budweisers in the back of Stacey's truck.â€ The song continues as you might think it would and eventually fades out around the three and a half minute mark.

Overall, I have no problem admitting that â€œSpazz Outâ€ isnâ€™t my kind of jam, but if I walked into nightclub and heard this over the sound system I would probably enjoy it in a â€œthereâ€™s a time and a placeâ€ kind of way. So unless I I find myself in a club around 2:00am near the beach in Miami, I donâ€™t think Iâ€™ll be rocking this track beyond the point of curiosity. However, I believe in being challenged on occasion and almost all of the traditional punk I listen to employs the same stylistic approach, so I enjoy seeing a musician like Travis Barker, who comes from traditional punk, go outside the lines and offer me something different.