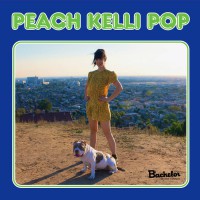 Peach Kelli Pop's new album sounds like the other Peach Kelli Pop albums. I could simply finish the review right there, but I feel that I should clarify things a bit. For the uninitiated, Peach Kelli Pop's modus operandi is showing up every year or so and releasing an album comprised of adrenaline sugar rush energy and exploding bubblegum intensity. Right as the songs start to suffer from "sounds-the-same-itis," the album ends. Peach Kelli Pop's Allie Hanlon follows a simple formula, yes, but nobody else is making music quite like her right now.

Allie Hanlon and her band create music as fast as any classic hardcore band did in the 80s, but the melodies are catchier, the lyrics are cheerier, and the instruments are tuned up. Imagine Youth of Today singing about a day at the beach instead of growling about making a change (then take that song and play it at 45 RPM). Sugary songs like "Shampoo" and "Plastic Love" will worm into your brain and rot your teeth until they dissolve and slide down your throat. As on the two previous records, these are bouncy songs with the simple aim of lifting your mood. Unlike the last two albums, however, III was recorded in a studio, meaning that the layered melodies are much easier to differentiate. The catchy guitar lines and swift vocals are able to compete for your attention with this much cleaner sound.

Closers "New Moon" and "Please Come Home" arrive to slow things down considerably. This change of pace is not a bad thing, but sticking them both at the end does not do this album's sequencing any favors. The blatant and overt cutesiness found on this record is not going to be everyone's cup of tea (and those who feel that way should avoid the cover of the Sailor Moon theme found here) so you might find this album to be an apprehensive enterprise. But, since this album clocks in at a scant 20 minutes, why not give it a shot?

Craig Ibarra: A Wailing Of A Town [Book]

Fucked Up: Live in Birmingham